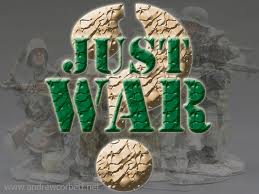 When President Obama announced last April that he was sending the United States military to bomb Libya, he not only violated the United States Constitution, which he has taken an oath to uphold, but he also violated the moral principles of the just war. The Constitution permits only Congress to declare war and the president to initiate on his own only a truly defensive war. When the president takes an oath to uphold the Constitution, he also promises to uphold the treaties into which the U.S. has entered and the laws that have been written pursuant to those treaties.

St. Thomas Aquinas is the modern articulator of the idea that governments are required to follow the same moral principles as the rest of us. This is particularly so in the case of a government that claims its source of power is the consent of the governed. St. Thomas More once put it this way: "Some men say the earth is round and some say it is flat. If it is round, can the King's command flatten it; and if it is flat, can Parliament make it round?"

Of course, the answer to those questions is no; and the reason it is no is that kings and parliaments – all governments – just like all living beings, are subject to the laws of nature. One of those laws was articulated by Aquinas and embraced by More and accepted by Thomas Jefferson and taught by many Judeo-Christian scholars, and was eventually engrafted into treaties and into American law. It is the concept of the just war. In American law and culture, for war to be valid, it must not only be lawful, meaning either declared by Congress or defensive; it must also be just.

What is a just war? For a war to be just, generally, a half-dozen principles must be met.

First, since force destroys, and there is a presumption against its use, the presumption must be overcome by first using all peaceful and viable means and alternatives to war; and it must be clear that these alternatives are fruitless before a war can be just.