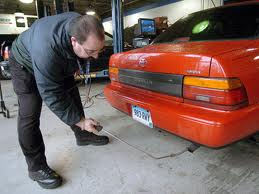 You know that “check engine” light on your dashboard? What if instead of just telling you that the car’s computer has detected some fault with the emissions control system, it told the government – via roadside readers and satellite uplinks?

It’s called OBD III – and it’s right around the corner.

All new cars built since the mid-1990s have OBD II – or On Board Diagnostics II. This system standardized diagnostics by specifying that every new car come equipped with an OBD port (usually located somewhere near the driver’s side kick panel, on the underside of the dashboard) into which a technician (and your state’s emissions test station) can plug a scanner that downloads stored “trouble codes.” It is these trouble codes that also trigger the yellow “check engine” malfunction indicator light on your dash.

Mostly, these codes involve problems with the emissions control system rather than the engine itself. They’re often intermittent and minor. This is why it’s possible to continue driving the car with the “check engine” light on and everything still seems ok.

And it’s why the Powers That Be want OBD III.

In the words of the Specialty Equipment Manufacturer’s Association (SEMA), the vast umbrella organization representing automotive industry parts and equipment suppliers, OBD III is “A program to minimize the delay between detection of an emissions malfunction by the OBD-II system and repair of the vehicle.”