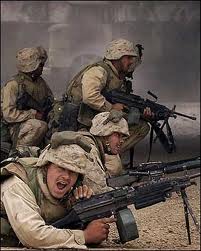 L: Doug-Sama, I've heard you say you think the US is setting Iran up to be the next fall guy in the wag-the-dog show – do you think it could really come to open warfare?

Doug: Yes, I do. It could just be saber rattling during an election year, but Western powers have been provoking Iran for years now – two decades, really. I just saw another report proclaiming that Iran is likely to attack the US, which is about as absurd as the allegations Bush made about Iraq bombing the US, when he fomented that invasion. It's starting to look rather serious at this point, so I do think the odds favor actual fighting in the not-too-distant future.

L: Could they really be so stupid?

Doug: You know the answer to that one. We're dealing with criminal personalities on both sides, and criminals are basically very stupid – meaning they have an unwitting tendency to self-destruction. One thing to remember is that most of those in power in the West still believe the old economic fallacy that war is good for the economy.

L: The old broken-window fallacy. Paraphrasing Arlo Guthrie, it's hard to believe anyone could get away with making a mistake that dumb for that long. Our friends at IHS put together a great, brief video debunking the fallacy.

Doug: People like those in power still suffer the delusion that it was World War II that ended the Great Depression for the US. Actually, it was only after the end of the war that the depression ended, in 1946. In his book World Economic Development: 1979 and Beyond, Herman Kahn documented long-term growth throughout the 20th century. Between 1914 to 1946 – a very tough time, with WW I, the Great Depression, and WW II – the world economy still grew at something like 1.8%. I believe real growth would have been several times as great, were it not for the state and its products. But people still believe that spending money on things that explode and kill and destroy is somehow good for the economy.

L: I suppose they think it's okay if it creates jobs here and destroys lives and livelihoods "over there." But aside from the fact that it's not safe to assume today's enemies are not capable of bringing the battle onto US soil, it still ignores the fact that you're spending money on stuff that gets destroyed – like broken windows – and that impoverishes us all. Worse, the cost is not just economic.

Doug: That's right. This coming war with Iran has the potential to turn into something resembling WW III, with enormous consequences.