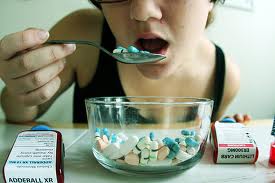 This is something I've been meaning to bring up on the site for awhile, and the recent thread on ADD really got me thinking about it. I'd really rather this didn't turn into a flame war over whether or not ADD is real; for my purposes it doesn't matter. For what it's worth, I received several very thought provoking PM's on both sides of the issue after the comments I made on the above mentioned thread.

What I'm increasingly concerned about is whether or not I should be thinking about drugging my kids so they're not at any competitive disadvantage in their respective marketplace (at the moment, grammar school). My concern is that, no matter how naturally gifted your kid might be, he's gonna look like a utility shmoe batting next to a juicehead like Mark McGuire or Barry Bonds. Academically speaking, of course.

To complicate matters, there's a difference of opinion in my own home. For those who don't know, I have two boys aged 7 & 8. They were raised in a Russian orphanage until we adopted them at 3 & 4, respectively. So they had a lot to overcome right out of the gate, not the least of which is the fact that neither of them had ever heard a word of English before the first time I said hello.

Their development has been nothing short of remarkable. Studies have shown that children raised in Russian orphanages lose an average of 10 IQ points for every year they're there from age 3 on. Both my boys are able to speak, read, and write English at their grade level and they're lower-middle of the pack in the math (my older boy is actually beginning to grasp mathematics at an accelerated pace).