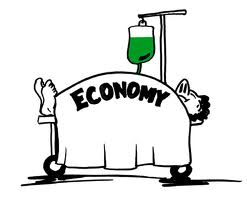 If you have any money and you want to understand the lies that “your” government tells you with statistics, subscribe to John Williams shadowstats.com.

John Williams is the best and utterly truthful statistician that we the people have.

The charts below come from John Williams Hyperinflation Report, January 25, 2012. The commentary is supplied by me.

Here is the chart of real average weekly earnings deflated by the US government’s own measure of inflation, which as I pointed out in my recent column, Economics Lesson 1, understates true inflation.

This chart (below) shows the behavior of inflation as measured by “our” government’s official measure, CPI-U (bottom line) and John Williams measure which uses the official methodology of when I was Assistant Secretary of the US Treasury. The gap between the top and bottom lines represents the amount of money that was due to Social Security recipients and others whose income was indexed to inflation that was diverted by the government to wars, police state, and bankers’ bailouts.

Unhappy with prices, ranchers look to build own meat plants

Stellar Demand For 30Y Auction As Curve Comes Crashing Down

Three bizarre reasons why inflation is here to stay

Treasury Secretary Yellen says she wants to get rid of the debt ceiling as McConnell...

Rabo: Just Wait Until We See The Impact Of Forced Vaccine Mandate Layoffs On The Labor Force

Inflation vs. Stagflation: What's the difference?