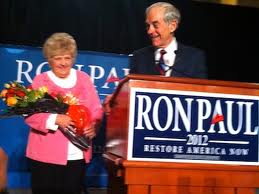 Great article on Yahoo! about the media's treatment of Ron Paul and how one can learn more about Paul from the comments under the article, than the actual article:

It's time we stood up and declared "Enough is Enough"!

It's time we stood up and declared Enough is Enough!
Voter Fraud, MSM Blackout and outright lies. It's time we stood up and said enough is enough. I would love to see all Ron Paul voters and supporters protest at their polling stations at a specific date and time. "Occupy the Polling Stations" (for lack of a better name. Local media would flock to cover it. MSM be damned.

There is no question that Ron Paul is head-and-shoulders above all of the other candidates in this race. For anyone with eyes to see with and a brain to think with, the record is clear.
Honesty, incorruptibility, integrity, and following the Constitution are only words that describe Ron Paul. If you described any other candidate with such words, you would be called a liar and hypocrite.
The ignorance of the sheeple saddens me, but the mission of the Dept. of Education to dumb-down the masses has been fulfilled. The people are so easily distractable by Super Bowls, cell phones, texting, and the other usual vices. How to wake people up from this dream state of distractions is the pressing question is the short time left.

Great article. Thanks for posting!

Im gonna wait a day or two for more reader comments (only 14 right now) before linking to friends or posting this article anywhere. Hope to see more substance filled informative comments on this article about "comments", which is so true!

Maybe you misunderstood me. I understand the author was talking about comments in various other articles, but Im sure some of those same types of informative reader comments will be in this article as well.

So before I link it to any friends who arnt already Paul supporters, I'll wait a day or two for good comments to build up in this particular article so they can see what the author is talking about, like most of us already do.

Know what I mean? Sorry if this sounds confusing.

The writer got one of his own facts wrong. It was only a partial audit of the fed... lol

Yahoo is bs, this article is great, but they would never put this on the front page. Yahoo totally ignored our moneybombs and RP in general in 07/08.

whether the article is pro or anti Ron Paul and without fail they seem to run 80 to 90% in favor of him and his message.

This is just one of the reasons why it does not pay to listen to the punits on TV, radio or the other naysayers in the MSM.

What we already know. A very good article that hopefully a lot of people will find.

As a strong Evangelical Christian, I believe Ron Paul best represents what a Christian should represent while in public office. He understands the role of government and how to carry himself and his beliefs while serving in a secular government. Historica

Nice that someone else notices the media blackout regarding Ron Paul.
But lately, it isn't a blackout, but a smearout. Half truths and outright lies are associated with his name in the search engines.
This reporter has it right.