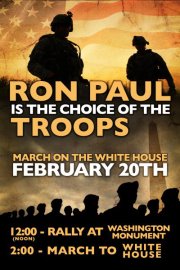 1,000 Veterans to March on the White House for Ron Paul, Organizers Overwhelmed

It's only been up for a couple weeks, but according to the Facebook event page, which just passed 1,250 "going" this past Friday, Veterans for Ron Paul 2012 are going to be an undeniable presence in Washington, DC on President's Day. The organizers have been overwhelmed by the positive response, much of which is from veterans and active duty troops who are hearing Ron Paul's message for the first time because of this event. Many passionate veterans are even coming from as far away as the west coast, and almost every other post on the wall for the event page is a request or offer for long-distance transportation. Emails to organizers have also indicated that there will be a large contingent of active duty troops in the formation who have declined to RSVP publicly on Facebook. However, organizers are realistic about the numbers, as former US Marine and Fallujah combat veteran Adam Kokesh said, "We know 1,250 on Facebook includes some supporters who won't be there, but we think it's a reasonable goal now to have 1,000 veterans in the formation."

On President's Day, February 20th, 2012, the founders of Veterans for Ron Paul 2012, Nathan Cox and Adam Kokesh, will lead a formation of veterans and active duty troops who support Ron Paul's candidacy for President of the United States from the Washington Monument to the White House. Upon arrival at the White House, they will do an about face and render a hand salute to a folded American flag. They will hold the salute for as many seconds as troops have died under the Presidency of Barack Obama, including suicides.

The purpose of this event is to make it clear to the American people that Ron Paul is the choice of the troops and the candidate who will have the greatest support from those he would lead as commander-in-chief. This is already evidence by the fact that Ron Paul has received more campaign contributions from active duty service members than all other presidential candidates combined, INCLUDING Barrack Obama. The troops want a President who is going to be decisive, put America's security first, and only send them into harm's way with a clear moral imperative. Ron Paul is the ONLY candidate who even comes close to meeting those criteria.

Any active duty service members who join will be invited to march at the front of the formation. Proof of service will be required to march in the formation for all current or former military personnel. Family members are invite to march behind the formation and supporters are encouraged to line the route of the march and be present for the ceremony at the White House.

For more information about this event, please contact Veterans for Ron Paul 2012 at VFRP2012@gmail.com or see the facebook event at:

To see the first official announcement of this event: