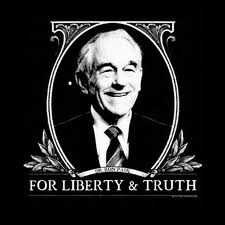 Ron Paul is a great man and this video shows he has been fighting for the American people for decades and will be there to end the tyranny of psychopathic criminals that have hijacked our great nation. This video exposes the Truth of Ron Paul. We need this man. He is the only hope we have and if he doesn't make it into the White House there won't be anything left of the United States-- civil war will be a certainty. The U.S. is hijacked by a bunch of mobsters who don't give a damn about the nation and certainly don't care about the American people. 60 treasonous psychopaths in the Senate just voted in favor of locking up American citizens indefinitely without any legal recourse whatsoever in custody of the military-- turning the U.S. into a military dictatorship. Under this law they have declared they are no longer abiding by the Constitution and they have also declared they are criminals. We must stop voting for the two party scam that has given a foreign nation total control of the Democracy of the U.S. These people are guilty of High Treason for even considering such a law-- against the people of the U.S. and they need to be removed from our government.

11 Comments in Response to RON PAUL EXPOSED!!! Is this the man we want to see running the U.S.A.? (video)

I did it on porpoise.

Kim Dyer former #44164 here.  First off, anyone knows that being a poor speller, does not make you an idiot.  Your genius might be in another area, or your ego center...  Take your pick.  Ad Hominem is a distraction with an intent to disprove using an irrelevant fact FOR WHICH JOSEPH VANDERVILLE HAS CONSTANTLY USED to discredit me.

He also uses lawyer tricks to incorrectly assume FOR US that the media and the polls are an accurate reflection of what the people want.  He constantly uses these dirty tricks and I grow weary of the absolute lack of morality and outright intellectual arrogance.  I would bet every cent I own that Joseph Vanderville is an Ashkenazi Jewish attorney who benefits from the Racketeering (headed by the global banking cartel/Federal Reserve), and is most likely,  so many of them receiving a second hidden paycheck from the CIA (Criminals In Action).  This, just like other attorneys I regret to have come to know, in a 20+ years brush with law and legislature.

Why is this man and his posse of government-loving gang-stalking fraud (Russia & East Germany style) with only anonymous screen names so bent on attacking Ron Paul and all those who identify their racketeering?

Funny, Ron Paul is speaking about the banks and the real estate investing that is illegal and misappropriates what funding has been intended for, just as I have stated, but Joseph Vanderville ("JV") has a fit about it, and prefers to make it about "[my] past trauma" ... AD HOMINEM disparagement.  (e.g. Just because I've had trauma, it doesn't make me wrong; AND just because I have something original to say that goes against the mainstream media brainwashing, it doesn't make what I have to say crazy).  He speaks, like most bottom-feeding attorneys: from both sides of his mouth with a lined pocket and a forked tongue.

JV insults the readers by assuming FOR US that the elections and media are corruption and racketeering free, when even Kennedy blatantly spoke of secret societies and passed laws against this very dynamic (1961 RICO ACT) that destroyed Russia, then Germany, and now our beautiful Amazing country.  We can thank the formation of the CIA formed with 1948 Israel (Israel was a nation/as in people, blood-- not religious conversion), and sneaking the Federal Reserve/ADL formations of 1913 for that.  (ADL is legalized terrorism to Americans for Israel).

So, am I an anti-semite?  No.  Apparently, I have more rights to Israel through history and blood, and suffering than any racketeering Ashkenazi in America and I know that, and "Joseph Vanderville" knows that (and is apparently quite threatened by that).  DaVinci Code even uses the Stonemasonry built by a Templar in Scottland in the 1400s well before 1492, and credits the builder and legacy to their loss and injustice from Friday, October 13, 1307.  The difference is, I don't expect special privileges for my heritage, nor do I consider myself superior to what so-called "Jews" call gentiles or the more derogatory term "Goyim" a perversion of the counterfeit "Jew" aka "King's men" (thank you Danny and Denny G. for that term). (Translated today:  non-criminal cult member).

The Mormon Church knows this problem and has benefited greatly from the counterfeit Jewish and Mormon domination of CIA real estate fraud and BANKETEERING using their other global intel affiliates.  Unfortunately for The Global Banking Cartel, ("The" emphasized), they need authentic rightful heirs to pull it (Zionist New World Order) off with the least resistance, but I don't know of an authentic Sinclair who is going to sell out to their evil for them.  I will take a bullet first.

Further, unfortunately for the Mormons, through Prophet Spencer W. Kimball (his grandson my former employer that resulted in a 1994 kidnapping and assault in Romney-dominated Michigan),  trying to bring in the American Indian culture did not cover the DNA evidence the proves the Book of Mormon to be a fraud.  Thus, the reason that Ashkenazi Jews (Khazar descent) are intermarrying with dark skinned persons more than ever.  Unfortunately, they do not have enough time.  The truth and science has come to a head.

In my ID screen, Psychictaxi is known to be an “Ad Hominen” specialist [specializing on mud-slinging and badmouthing].  Below, he attempted to throw a dig on me. He said, “Joseph, you were doing so well with your english - what happened!?!   I believe you Whereupon, Doug Spooner called Psychictaxi’s attention to his carelessness and poor English in using the wrong, and mispelled word "ment". See below.

I apologize if that is considered a racial slur in my previous comment.

I'm getting just old enough that I am becoming forgetful What is "Ad Hominem?" Some kind of Mexican soaked corn that they make grits out of?

I notice a lot of times that my little finger hits the "a" but not hard enough. And my computer is getting old enough that it is slow enough that the "CAPS" key doesn't always "take" as I speed along.

But, all in all, it was an excellent comment, Ed.

Ed, as an Ad Hominem specialist that you are in life who cannot even read English without raising an eyebrow, you have easily forgotten that I am too far ahead in everything where you are that your speck-in-the-eye insult no longer bothers me at all. In this instance, I will teach you Literature -- I will explain to you what it is because I know you hardly know what it is -- where Shakespeare violates the rules of grammar to become the world's Ultimate Writer of all times. In many occasions in this Forum, I have educated you for making comments that fall short of the public's expectation because of your rush judgment and carelessness [you are too emotional] and your very limited knowledge.  The public had noticed that because of your short biased mind, you should not jump into a rush conclusion when you make a comment in your reports published in this website.  Dig up the files. Many times I have reminded you of jumping head first into an empty swiming pool. If this is too deep for your to understand, come to me. I might still help you.

Are you sure you "ment" what you said about proofreading?

Joseph, you were doing so well with your english - what happened!?!   I believe you ment to write:

"No matter what kind of venom this video spits out against the people that run the Government, it would NEVER make Ron Paul president. The American public does not want to see this man running the U.S.A -- can't you see? He will soon quit anyway, and there is no use crying over spilled milk."

If you would like to be more credible in your attacks, you can e-mail me your text, and I will proofread it and return it to you for posting.

Nothing says 'idiot' better than improper spelling, grammar, or syntax.

No matter what kind of venom this video spits out against the people that runs the Government, it would NEVER make Ron Paul president. The American public does not want to see this man running the U.S.A -- can't you see? He will soon quit anyway, and there is no use crying over a spilled milk.