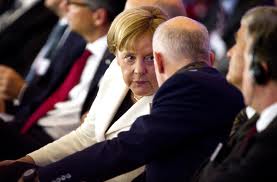 (Reuters) - German Chancellor Angela Merkel told Greece on Monday to make up its mind fast on accepting the painful terms for a new EU/IMF bailout, but the country's political leaders responded by delaying their decision for yet another day.

Failure to strike a deal to secure the 130 billion euro ($170 billion) rescue - much of which Germany will fund - risks pushing Athens into a chaotic debt default which could threaten its future in the euro zone.

Speaking in Paris, Merkel expressed the exasperation spreading among euro zone leaders at seemingly endless wrangling in Athens that has yet to produce a definitive acceptance of the austerity and reform conditions demanded by the lenders.

"I honestly can't understand how additional days will help. Time is of the essence. A lot is at stake for the entire euro zone," she told a news conference with President Nicolas Sarkozy.

But leaders of the three parties in the coalition government appeared to need at least one additional day.