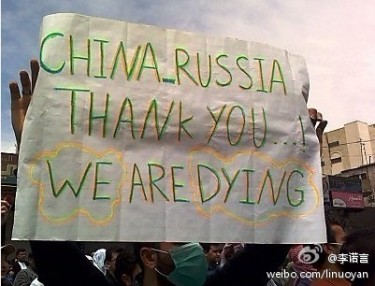 The West and Russia had a major showdown Saturday Feb. 5 over the Arab League resolution calling on Bashar Assad to step down and allow the formation of a national unity government. US President Barack Obama demanded a UN stand against the Syrian president's "relentless brutality" and a vote before the end of the day. It was put to the vote and defeated by Russian and China vetoes.

Moscow sources charged that the motion had been intended to pave the way for war in Iran and a bid to overthrow the Tehran regime.
debkafile's military sources report that the Russians backed their hard line against the West by putting Rapid Reaction Force (aka Spetsnaz) units in Black Sea bases on the ready to set out for Syria and defend Damascus. A Cold War dimension has been injected into the Syrian crisis, which is fast descending into a sectarian war between Syria's ruling Alawites (Shiites) and the majority Sunnis. The regional dimension is provided by pitting Iran and Syria against Turkey and the Gulf Arabs.

The Russian Foreign Minister Sergei Lavrov's earlier announcement that he would visit Damascus next Tuesday, Feb 7, with Russian Foreign Intelligence Service chief Mikhail Fradkov was meant to buy Bashar Assad another three days' grace to polish off the opposition before a possible UN-ordered ceasefire.
However, the US and Western powers refused to wait for further Syrian excesses to take place after various sources reported earlier Saturday that Syrian troops had shelled  the Homs district of Khaldiyeh, killing an estimated 350 people there and injuring some 1,500, in the worst military bombardment of nearly 11-month-old uprising,.

debkafile's intelligence sources note that Moscow's gesture to send the Russian foreign intelligence chief to Damascus alongside the foreign minister is supported additionally by the presence in the Syrian port of Tartus of Russia's only aircraft carrier Admiral Kuznetsov with two destroyers and a marine force.

I never thought I would thank Russia and China for maybe stopping a war and saving the lives and maiming of many American soldiers, our children, but here I am doing just that. Unbelievable! This is what happens when we allow the U.S. President the power to go to war by his own decision or whim unlike the Iranian president who cannot. Unbelievable but true!

Israel is the fear-driven tail that will wag the U.S. dog with its penchant for false-flags. I've been pro-Israel as far as I can remember but I am fast becoming an anti-Zionist. Unbelievable!

There was no WMD, nuclear bomb or the making thereof in Iraq or Iran. Khamanei, Clapper, Panetta, Patreaus, Putin all agree. And we're still violently minding other people's business. Unbelievable!

When countries declare economic sanctions, it is the same as declaring war. Iranians have the right to defend themselves in such a manner. Because of this I wouldn't blame Khamanei for withdrawing his fatwa and making a nuclear bomb if only to balance power. I am starting to trust him more than our president or Israel. It is only to the ignorant that this saber-rattling appears not dangerous. How the heck can this be happening? Unbelievable!

"Moscow sources charged that the motion had been intended to pave the way for war in Iran and a bid to overthrow the Tehran regime." That is correct. Just like the sign, "Thank you Russia and China", and that is for calling it what it is. Here we have Israel saber rattling at Iran and the president of the United States taking singing lessons so he could toot a tune and attempt to get the American public to think he is still cool. After the word cool comes fool, and that is what the American people think about him now. A fool in the White House that thinks so highly of himself, that damn be the people, "Make me look fu-king cool again, said Obama. How much did he spend on singing lessons at our expense? You know that he was unsure of himself, when he had to pause before breaking into an off key tune, and then that look on his face, disgusting.