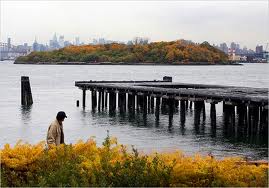 Ian Ference, a photographer and historian living in New York, has spent nearly four years documenting the remains of North Brother Island, a 13-acre piece of land sandwiched between Riker's Island and the Bronx in the East River that's been abandoned since 1963.

During the first half of the 20th century, North Brother "was home to the quarantine hospital that housed Typhoid Mary, was the final destination of the General Slocum during its tragic final voyage, and was the site of an experimental drug treatment program which failed due to corruption," according to Ference.

Today, the island is off limits to the general public. From March through September, it serves as a nesting ground for a number of endangered seabirds.

Since 2008, Ference has taken more than 17 trips out to the island through special permission from the New York City Parks and Recreation Department. He has been kind enough to share some photos of his journey—he's collected more than 2,000 images so far—and tell us what it's like to explore a forgotten portion of New York City's Five Boroughs.

How did you first hear about North Brother Island?