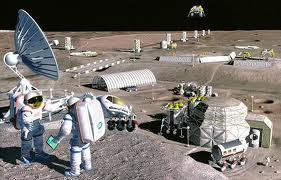 I went to the DLD conference in Munich a couple of weeks ago.

One of the cool things about the DLD conference is that they throw in speakers and panels on topics other than the latest buzzy consumer web feature.

Before I got to the conference, I got an invitation to a special breakfast seminar about space.

That sounded cool, so I went. I sat in the back in the Google+ lounge eating three fried eggs and listening to folks from Virgin Galactic and Space Adventures (the company that shoots people into space on Russian rockets), and Esther Dyson, who has done the training to go into space.

Here are some cool things I learned:

About 500 people have gone to space Soon, one panelist promised, 500 people will go to space every year Virgin Galactic, Space Adventures, etc., are opening space to normal people. Or, at least, to normal people with $200,000 to blow on a brief trip to sub-space (Virgin Galactic) or $50 million to blow on an actual space trip (Space Adventures.) The next few decades will be the ones in which people permanently move into space. What will drive us into space will be the same things that drove us to explore planet earth: The promise of unlimited resources and incalculable riches. The first trillionaire will be made from space (in one panelist's opinion) The "ownership" of space hasn't quite been worked out yet, and it won't be until some private individual goes and plants a flag somewhere. Then the ownership issues will be worked out quite quickly. Our existing laws, one panelist says, suggest that if you go capture an asteroid, it's yours. Some asteroids might be made of super-valuable stuff. So someone will eventually do that.