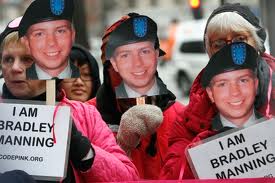 WikiLeaks suspect Bradley Manning is headed for a general court-martial, according to the commander of the U.S. Army Military District of Washington in an announcement released late Friday.

Maj. Gen. Michael Linnington, the general convening authority for the district, made the determination that Manning will face all 22 charges leveled against him, include aiding the enemy, wrongfully causing intelligence to be published on the internet knowing that it is accessible to the enemy, theft of public property or records, transmitting defense information, and fraud and related activity in connection with computers.

The most serious charge — aiding the enemy — carries a possible death penalty. Prosecutors have said they will not seek the death penalty. Instead, Manning faces life in prison if convicted of all the charges.

Linnington’s decision was no surprise to court watchers. In mid-January, the presiding officer of Manning’s Article 32 hearing, Lt. Col. Paul Almanza, recommended that Manning be court-martialed under all 22 charges, indicating that there were reasonable grounds to believe that Manning committed the offenses with which he was charged.

His recommendation was subsequently upheld by the special court-martial convening authority Col. Carl R. Coffman, commander of Joint Base Myer-Henderson Hall, who passed his recommendation in late January to Gen. Linnington. Linnington’s is the final decision in the matter.

It’s not known when Manning’s court-martial proceedings will begin, but the speedy-trial rule under the Uniform Code of Military Justice requires that suspects be tried within 120 days of being arrested or 120 days of the “preferral of charges.”