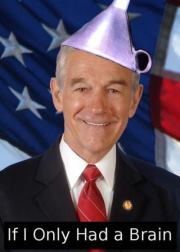 Anonymous hackers infiltrated the website of the racist American Third Position Party (A3P) and an affiliated message board, WhiteNewsNow. The data dump which followed suggests Paul’s campaign team and A3P share more members than he’d like to admit.

Woww … this is something new! This time it is foolish to save Ron Paul from this "trap".

This hacked indictment of Ron Paul as a Racist, is really bad for the Texas Congressman. Efforts to disassociate Ron Paul from his company of notorious Supremacists only get his situation worse. The defending arguments propounded by his trapped supporters only insult the intelligence of the public, which render Ron Paul’s position hopeless.

For instance, the campaign fund contributions Ron Paul received from notorious Supremacist organizations as shown in this hacked video tape do not make him a racist, his supporters argued.

And yet, if he is not a racist or against racial bigotry, Ron Paul should have refused those contributions or should have returned them. It is so infantile to argue that these are gifts that could not be refused or returned. That’s silly. Ron Paul neither refused nor returned them, nonetheless. Instead, he used them to promote the cause of racial bigotry … he used them to fund his relentless attacks of the Government which is in his mind discriminates against racial minorities, more particularly Blacks.

In the GOP debates, Ron Paul repeatedly attacks the Government by saying that it discriminates Blacks as second-rate citizens. To grab the limelight, he incites a racial war and gets a headline, and as a scapegoat faults the Government for it.

Let us drive a comparative example right into the head of Ron Paul supporters to make them understand their indefensible position. If a politician receives a funding support from Al Qaeda in a terror campaign to discredit the Federal Government, that politician is worse than Al Qaeda itself. For supporters to deny that such politician is not worse than the terrorists themselves, insults the intelligence of the American public.

Ron Paul is more authentic and believable everytime he openly declares that the U.S. Government is engaged in racial bigotry -- relegating Blacks to a status of second-rate citizens in this country – than when Romney, Gingrich and Santorum declare the existence of such racial discrimination themselves. The public would not believe Romney or Gingrich or Santorum, but would believe Ron Paul. The reason for this is that the public knows of Ron Paul’s association with those groups of White Supremacists – and the public knows exactly what Ron Paul is saying. He is part of or at least in association with that racial group.

But of course even assuming that Romney, Gingrich and Santorum knew the existence of racial discrimination, unlike Ron Paul they would never attack the U.S. Government just to get votes. They are not in politics to destroy the Government but to find ways and means to mend its faults. Ron Paul is not on the same boat because even though his intention to destroy the Government can be credited with anything good, his "left" hand contradicts what his "right" is doing. This is the reason why I considered him "unelectable".

But as a whole, to me this is water under the bridge the moment Ron Paul quits the GOP presidential nomination race. The decision to drop out is just in the corner ready to be announced any day from now. JV

Venacio Tan, enough already.  Don't you get sick of yourself?   We all SEE who and what you really are.   Stop insulting us.  Better yet, stop antagonizing.

Ernie Hancock’s argument that Ron Paul is not a racist in spite of this proof is weird, to say the least.

Attempts to hush-hush this evidence that Ron Paul is in association with racists will not succeed. This hacked information could no longer be dismissed as some kind of a political claptrap against Ron Paul’s true identity as a White Anti-Government Supremacist.

Ron Paul supporters may deny that their political deity is a racist – that’s easy to do – but even by just associating himself with racists, Ron Paul already is.

The more evidence is unearthed proving beyond reasonable doubt that Ron Paul is a racist, the weirder the denial becomes. Mr. Hancock’s explanation in support of Ron Paul on this issue needs to be further explained why it sounds so weird. His position is that just because Ron Paul allowed his racist letter to be published does not prove that he is a racist.

Hancock backed this up by saying that just because he allowed Mike Renzulli to be published in his website does not mean that he is a follower of Renzulli’s beliefs or opinion. Unless he openly declares that he is a Renzulli follower, he implies that this tolerance on his part to publish Renzulli in his website is nothing but Freedom of the Press.

But here’s the marked difference: Hancock is an open supporter of Ron Paul. He does not only allow Ron Paul to be published in his website but used his website to campaign for, support and defend Ron Paul. Thus with Ron Paul enjoying the support and comfort of his website, his Freedom of the Press argument crumbles. This is no longer "tolerance" on his part in the name of Press Freedom, but partisanship in support of a White Anti-Government Supremacist using the Freedom of the Press as an excuse, or merely as a front, whatever beneficial motive he has. Whether that motive is ideological or strictly business he can profit from, it’s all up to him.

Mike Renzulli - "John T. Flynn made an effort to kick out Nazi sympathizers from the ranks of the America First Committee. Yet Ron Paul (who is associated with the Old Right) makes no effort to distance himself from White Supremacists and Nationalists. Is Paul that desperate for help that he enlists the help of anti-Semites or are his sympathies with them? This should leave Paul supporters wanting for an answer. Ultimately only he knows and (despite his denials) I do not believe Paul is not one of them due to his accommodating racists in his ranks."

Ernie Hancock - So... does your position apply to Powell and I? Are we to be considered supporters of Mike Renzulli's opinion because we demonstrate the libertarian notion that everyone should be allowed to be understood?

If by your own definition I am to be in any way branded as a supporter of your views on this site by my inclusion of your opinions on FreedomsPhoenix,... then I'm willing to listen about how we can make some obvious distance between our positions. a radio show interview? I could just ask you not to post anymore but nobody makes me read it so I really don't care. I encourage them to take the same approach. But,... if by your own standards I am to be considered supportive of anything you have to say just for my allowing you to say it... then we all need to make it very clear what all of our opinions are on that.

I tend to take the Dr. Paul route and not care.

Read in newsrooms and the Westminster village, Political Scrapbook is one of the UK’s leading political websites. We were voted Britain’s number-two left wing blog ..."

So, we know where Mr. Renzulli gets HIS news...

"...enlists the help..." did you REALLY use that phrase!?!  Is that your 'conclusion', or do you have something more solid that a photoshopped picture of Ron with someone demonizable?  FFS Mike, did you take a position with the Media?  Maybe Ernie and Powell see something of worth in posting this to the 'Global Edition' (just to show the World the insane lengths people will go to in trying to stop an idea WHOSE TIME HAS COME I'm sure), but it's tripe as far as I'm concerned, and I won't pollute THE R3VOLUTION CONTINUES Edition with it.  My readers have better uses for their valuable time.

(and I bet that sticks in your craw too - GOOD!)

John T. Flynn made an effort to kick out Nazi sympathizers from the ranks of the America First Committee. Yet Ron Paul (who is associated with the Old Right) makes no effort to distance himself from White Supremacists and Nationalists. Is Paul that desperate for help that he enlists the help of anti-Semites or are his sympathies with them? This should leave Paul supporters wanting for an answer. Ultimately only he knows and (despite his denials) I do not believe Paul is not one of them due to his accommodating racists in his ranks.

I actually read through a bunch of these emails, and most of them talk about how they think they are going to take over the election by becoming precinct committee men/women, and how they are going to do it through the political process. If I have learned one thing about politics, it is ,no group of people will ever sway the political process, and whoever the elite selected, still gets elected. If this group of people want to waste their time in the silly political process, then by all means..too bad their influence won't ever sway anything. They are better off  creating their own self sustainable communities if they want to live their own way, segregating themselves from other races.

Did you know that Ron Paul is part of the House of Representatives, a Congressman? Did you know that, as such, he is required to meet with all kinds of people? Can you even guess that some of the people he meets and talks to are opponents of his with regard to a presidential race? Do you think that just because you talk to someone, or send emails to, or receive emails from him, that suddenly you hold the same viewpoints and opinions as he does?

If someone donates money to your campaign, does that mean you owe them more than what your campaign platform is about? A donation is a gift. It can't be called back.

Hey guys, I have proof that Ron Paul is racist. I have a picture with Ron Paul and myself. I have seen this guy named JT Ready... He was carrying a rifle at the Occupy Phoenix kick off. there! I did it, and with only 2 degrees of Kevin bacon!

All I read was a whole lot of nuthin'. WTF?

The Surreal Case of a C.I.A. Hacker's Revenge

REDDIT: Hackers apparently got into the systems of Pfizer, Moderna, and Johnson & Johnson-