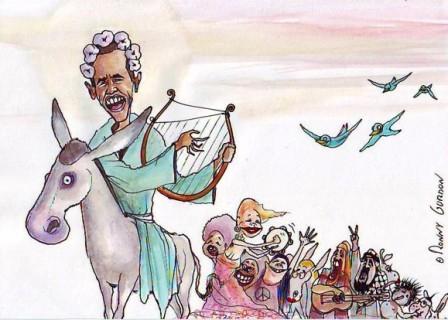 Of the current crop of Republican presidential candidates, all of them, except for Ron Paul, are whores and puppets for international bankers and international corporations (I call them Cosmodemonic Transnational Megacorporations). And Paul doesn’t stand a chance, because he is an adult.

It doesn't matter if Obama is re-elected, or if Romney gets in, or Gingrich, or any of the other sleazes. Nothing will change, since there isn't a dime's worth of difference between any of them. No matter who is elected, there will be only minor, cosmetic changes. And the believers in politics will be stunned at this, as they always are.

All of the naive were shocked when Mr. Hope and Change turned out to be a continuation of George Bush, but I wasn't. None of the current crop are adults. And that's the problem. A huge problem.

What makes Paul different? For one thing, he's a doctor, whereas all the others have become rich sucking at the public tit and avoiding real work. Paul also understands the importance of political and economic liberty. The others pretend they do, but in reality they don't.

Paul is actually an Elder, which every society needs and which ours barely has. The Elders have always been mentors and teachers of the young. Where are they now? They barely exist.

We no longer have Elders, either religious or political. They scarcely exist in grade schools, middle school, high school and college. There are some, but they are a vanishingly small number.

When people want to destroy a society, the first thing they do is kill the Elders. Then that society is lost. There's an old saying about it--"kill the head and the body will fall."

I cannot remember having one mentor--a Wise Elder--growing up. Most people cannot remember any, either. Much of the time those who pass themselves off as Elders are fools who don't know what they are talking about.

Robert Bly once wrote a book about a society in which there are no Elders. He called such a society (and the book) The Sibling Society. There are few adults and even fewer Elders in such a society. Many people are semi-adults. That's why Bly called them "siblings."