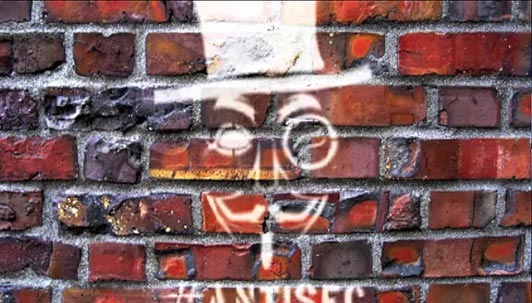 Early Friday, the FBI said that hackers from the well-known collective had intercepted and released a confidential conference call between the FBI and Scotland Yard.

A few hours later, Anonymous announced that it would release a massive archive of e-mails concerning the 2005 deaths of 24 unarmed Iraqi civilians during a U.S. raid in the town of Haditha.

The announcement states that Anonymous stole 2.6 gigabytes of e-mail belonging to Puckett Faraj, a law firm that represents Staff Sgt. Frank Wuterich, who is accused of leading the group of Marines in Haditha. The Web site of Puckett Faraj is not currently loading, and Gawker is reporting that the site was hacked.

A spokeswoman for Puckett Faraj confirmed that the Web site was down but said that she could not confirm or deny whether the site had been hacked.

Wuterich last month struck a plea deal in which he will not go to prison, but will be demoted to private.

Staff Sgt., Frank Wuterich, leader of the massacre at Haditha, in Iraq, became the seventh soldier to walk free - from the mass murder of twenty four unarmed men, women and children, in three homes and a taxi.

The youngest to die was one year, the oldest was seventy six year old, wheelchair-bound amputee, Abdul Hamid Hassan Ali. He died with nine rounds in the chest and abdomen.

A description of the assault on one Haditha home:

The Marines cleared it the way they had been trained to clear it, which is frags (grenades)first ... It was clear just by the looks of the room that frags went in and then the house was prepped and sprayed like, with a machine gun, and then they went in. And by the looks of it, they just ... they went in, cleared to room, everybody was down.

Most of the shots ... were fired at such close range that they went through the bodies of the family members and plowed in to walls or floors.

Days after the mass murders at Haditha became public: US forces killed eleven civilians, after rounding them up in a room in a house in Ishaqi”, in Salahuddin Province. All were handcuffed (presumably not the six month old) and executed. They were:

There are Falluja’s football fields of mass graves, Najav’s hotel and hospital parks, turned graveyards, the pathetic uncounted ones in gardens, in yards, the lost buried in the family home, across Iraq, by families who would be also shot if they ventured with their beloved, to the cemetery.

In Falluja, reminiscent of other historic “cleansings”, categorized war crimes, men between fifteen and fifty five were forbidden to leave or enter their city.

Iraqi families shot in their cars by US service personnel are beyond counting – and indeed have not been: “It is not productive to count Iraqi deaths”, as the inimitable General Kimmit reminded the world.

Deaths included the family of Ali Abbas, by rogue US missiles, in the residential Zafaraniya suburb of Baghdad, with its evocative Convent and ancient Catholic church. Ali lost his pregnant mother, father, brother and thirteen other family members. He also lost his arms. He was twelve years old.

In Mahmudiya, in 2008, fourteen year old Abeer Quasim Hamza, was gang raped then killed by five US servicemen - after they had murdered her mother, Fakriyah (34) father Qasim (45) and six year old sister. All were burned in an attempt to cover the crime. There were two convictions.

On 19th May 2004 forty six people celebrating a wedding in Mugrideeb village were mown down by assault helicopters, other attack planes and Marines.

Eman Khammas of Iraq Occupation Watch braved the dangerous road out to the village as soon as she heard. She found carnage – and remains of the musicians’ instruments, decorations, pots, sacks of rice, improvised bread ovens, sacks filled with leftovers for the animals – all who had been shot – and surviving eyewitnesses.

"The ground was full of bullets holes of different sizes, spots of blood every where, some a meter wide. In some of them the remains of human flesh were drying in the sun. . . . In one of these remains there was a long black lock still attached to the flesh. I could not see any more. I ran away back to the demolished house."

Those mown down, of the Rakaad Naif family, as they celebrated were:

Five from a family called Garaghool also died, thirteen of the band and three photographic crew. Forty six, mown down for celebrating a wedding..

Five from a family called Garaghool also died, thirteen of the band and three photographic crew. Forty six, mown down for celebrating a wedding..

That which will befall America seems to be rightly deserved.....