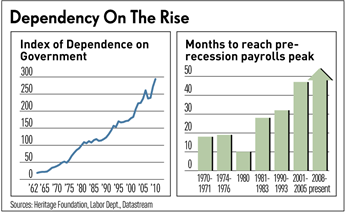 The American public's dependence on the federal government shot up 23% in just two years under President Obama, with 67 million now relying on some federal program, according to a newly released study by the Heritage Foundation.

The conservative think tank's annual Index of Dependence on Government tracks money spent on housing, health, welfare, education subsidies and other federal programs that were "traditionally provided to needy people by local organizations and families."

The increase under Obama is the biggest two-year jump since Jimmy Carter was president, the data show.

The rise was driven mainly by increases in housing subsidies, an expansion in Medicaid and changes to the welfare system, along with a sharp rise in food stamps, the study found.

"You can't get around the fact that policy decisions made over the past two years, on top of those made over the past several decades, are having a large effect on the pace of growth of the index," said William Beach, who authored the Heritage study.