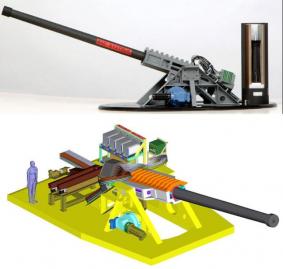 The United States Navy will receive the industry's first 32 megajoule EM Railgun prototype and begin testing in the coming weeks.

The Office of Naval Research (ONR) announced today that they will begin testing an advanced Electromagnetic Railgun (EMR) within the next few weeks. The development and testing of this advanced EMR is the result of a $21 million contract awarded to BAE Systems by the Office of Naval Research roughly two years ago. For those that may not know, the ONR is the office within the United States Department of the Navy that facilitates all science and technology programs for the U.S Navy and Marine Corps through various institutions, such as universities and government laboratories.

While most munitions both heavy and small depend on chemical propellants (like gunpowder), the EM Railgun launcher (as you may have guessed from its name) utilizes magnetic energy instead. The EM Railgun propels a conductive projectile along metal rails using a magnetic field powered by electricity. The magnetic field produced by the high electric currents thrusts a sliding metal conductor between two rails to launch a projectile at velocities of 4,500 to 5,600 mph. By contrast, the average velocity of a chemical propelled weapon is limited to about 2,700 give or take.

So what does that mean? Well, this increased velocity should allow for the Navy to reach targets of up to 50 to 100 nautical miles away or, if your inner sea-dog is a little rusty, about 57 to 115 miles out. Navy planners hope to eventually increase that range even further to distances up to 220 nautical miles (253 miles).

According to ONR, this increase velocity and extended range will give sailors multi-mission capability, and allow them to conduct precise naval surface fire support. In addition, ONR states that the EM Railgun may provide effective ballistic missile defense.

BAE Systems EM Railgun was delivered to the Naval Surface Warfare Center (NSWC) Dahlgren on January 30, 2012 and features a 32-megajoule payload. To add some perspective, one megajoule of energy is equivalent to a one ton car traveling at 100 miles per hour.