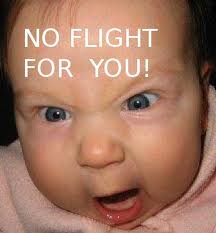 DENVER -- A Denver woman claims she couldn’t board a flight from Wyoming to Denver because of her gender. Jennifer Winning makes the flight from the small airport of Rock Springs, WY to Denver often, but on January 29th it was different.

“They wouldn`t let me get on the plane because I`m female,” Winning said.

She said she checked in and arrived at security about 35 minutes before the scheduled departure of her United flight.

“They asked if I was on the flight to Denver, I said yes, they said that they couldn`t screen me because they sent all the female TSA agents home,” Winning said.

A female agent was necessary because of those new pat-downs.

“I said, `Would you be willing to let me sign a waiver and I would approve for a man to pat me down if necessary?` and they said no,” she said.

Winning missed her flight and wound up renting a car for $165 and driving the roughly 350 miles back to Denver. She said she’s getting over her anger, but thinks the policies need to be clearer.

“If you can’t clear it without a female, why would you send them home?” she said.

FOX31 Denver received this statement from the TSA regarding this incident:

“In small airports, TSA works closely with the airlines and airport to keep the security checkpoints open to ensure that all passengers are screened appropriately.