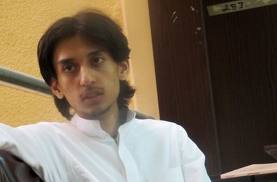 A 23-year-old Saudi Twitter user, Hamza Kashgari, fled the country Sunday to avoid being arrested for his religious tweets, only to find himself in the hands of the Malaysian police today. He had been heading to New Zealand to request political asylum.

On Saturday, the anniversary of the prophet Muhammad's birthday, Kashgari tweeted three times, expressing his religious beliefs about the founder of Islam. Within hours, he was inundated with violent threats. Despite a full renunciation, a warrant was issued by kingdom authorities for his arrest and the Kingdom's religious Fatwa Council condemned him as an apostate and an infidel, crimes which are punishable by death.

According to one of Kashgari's friends, who wishes to remain anonymous, these are the three tweets that were the basis for the Saudi arrest warrant.