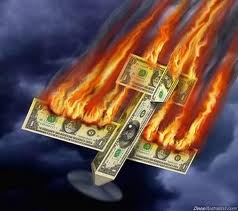 The dollar has been the world reserve currency since 1944 and the Keynesian Fabian socialist economic palaver in New Hampshire's White Mountains. They all should have paid more attention to Lord Keynes.

The situation is now gradually getting desperate, which is proven by America's attempt to isolate Iran financially. An effort by Hillary Clinton to choke Iran's economy by financial blackmail has failed miserably. Iran has concluded trade agreements with India to deal in gold, with Russia to deal in rubles and with China to deal in yuan. Those three, by the way, are Iran's largest by volume trading partners. Other nations that are avoiding the dollar are Venezuela, Cuba and any number of additional South American states.

To try accomplishing economic policy changes in opponents simply does not work if your currency is seen as weak and the government is seen as incapable of rational behavior. To say that our government has acted irrationally for the last ten years is a major understatement. The dollar has been severely weekened through our national budget and spending practices that any fool will see are untenable. In the face of this reality, Obama has now asked for and Congress has granted yet another massive $1.2 trillion inflationary monetary expansion, with more borrowed money. This will bring the total national (on the books) debt to about $17 trillion by 2013. Off the books we can only assume about another $53 trillion. Given Washington's make-believe accounting practices, no one has the slightest idea of what our nation's finacial position really is.

How screwy can all this get? Today, February 7th 2012, Benjamin Bernanke in front of a Senate panel stated, "Since I have been in office the American inflation rate has been steady from between 1-1/2% to 2%." That's right, Ben. Just keep letting your chauffer fill the gas tank and your cook do the shopping and buy your clothes in Hong Kong while indirectly billing it all to the taxpayers, and you can keep up this charade indefinitely. The really sad matter relating to this is that not one of the over 15 Senators in the hearing challenged Bernanke's pronouncements.