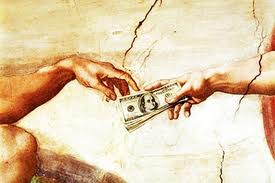 A Short History of American Money, From Fur to Fiat ... What do animal pelts, tobacco, fake wampum, gold, and cotton-paper bank notes have in common? At one point or another, they've all stood for the same thing: U.S. currency. ... The greenback is stable because the U.S. economy is huge and the United States is a terrific republic--OK. But it's also stable because everyone else's well-being depends on it, and on belief in its stability. That may be changing, though. As for paper money itself, the end of the gold standard meant that cash had become a total abstraction. Its value now comes from fiat, government mandate. It's a Latin word meaning let there be. In God we better trust. – The Atlantic / David Wolman

Dominant Social Theme: Money is that certain thing ... Well, we dunno exactly what it is, but here's a HISTORY of it.

Free-Market Analysis: Here's how we figure this article "went down" ...

"Hi, David, you're a contributing editor at Wired, a former Fulbright journalism fellow and a winner of the 2011 Oregon Arts Commission individual artists fellowship. You're a real bright guy and we're interested in a book on money. Why don't you write it?"

"But I don't know anything about money."

And so Mr. Wolman has written an article (see excerpt above) and a book called The End of Money. We looked up the book on Amazon.com, which shows it is to be published on February 14, 2012. Here's a book summary from the publisher:

For ages, money has meant little metal disks and rectangular slips of paper. Yet the usefulness of physical money—to say nothing of its value—is coming under fire as never before. Intrigued by the distinct possibility that cash will soon disappear, author and Wired contributing editor David Wolman sets out to investigate the future of money...and how it will affect your wallet.