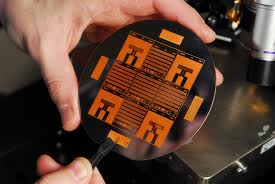 Back in 1959, Nobel-winning physicist Richard Feynman delivered a now-famous talk titled “There’s Plenty of Room at the Bottom,” in which he envisioned the potential applications of tiny machines. Today, one of the most important innovations leading to the current generation of smartphones and tablets is known as MEMS…

Shorthand for “micro-electromechanical machines,” MEMS are the tiny machines embedded in these products, which provide information regarding position and movement. When your mobile device changes how its screen displays when you rotate it, it is an MEMS device that tells it which way it is oriented. Like most of the electronic innards of a modern computer, MEMS are usually manufactured out of silicon.

The University of Wisconsin-Madison researchers studied a piezoelectric material called lead magnesium niobate-lead titanate, or PMN-PT for short. PMN-PT is a very high-performance piezoelectric crystal that is used, among other things, to deliver waves of ultrasound into the human body to produce 3-D images.