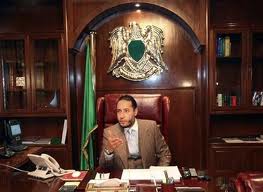 (Reuters) - Muammar Gaddafi's son Saadi warned on Friday of an imminent uprising in Libya, saying he was in regular contact with people in the country who were unhappy with the authorities put in place after the ousting and killing of his father.

Speaking to Al-Arabiya television by phone - the first time he has spoken publicly in months - Saadi said he wanted to return to Libya "at any minute" after escaping across the border to Niger when National Transitional Council forces captured the capital Tripoli in August.

He said he was in contact from Niger with the army, the militias, the NTC and other members of the Gaddafi family. It was impossible to verify where he was calling from as the station showed only an old still picture of Saadi as a backdrop to his words.

"First of all, it is not going to be an uprising limited to some areas. It will cover all the regions of the Jamahiriya and this uprising does exist and I am following and witnessing this as it grows bigger by the day," he said, referring to Libya.