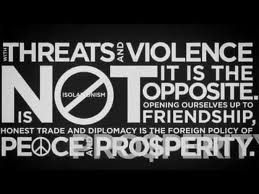 First of all, Dr. Paul has a correct view of the relationship between China and America. Dr. Paul recognized China as an excellent trade partner, and says American should not blame China for Americans’ own mistakes. Thank you Dr. Paul for acknowledging this. Yes, China takes some advantage of American’s policy loopholes and many other mistakes. But the Americans’ crony corporatism took a much bigger advantage of their own people. To solve the China problem, Americans need a leader who is intelligent and dare to challenge the status quo!

To trade with China is uniting the world. As truthful as in the feudal society, to achieve peace, countries trade with each other and their prince and princess got married. If American can trade with Qatar, why they don’t trade with Cuba and even Iraq and Afghanistan? Get the troops back and make a health environment for the world! American needs a leader who can deliver the message of peace to the whole world!

Secondly, Dr. Paul has a non-intervention attitude towards China. The media says: Ron Paul has a bad record on China, since he votes against condemning China’s system of forced labor in prison camps, vote against a resolution congratulating Liu Xiaobo, for winning the 2010 Nobel Peace Prize and call for his release from prison. These are symbolic votes, really does not solve any problems. But it innuendos that Dr. Paul does not support democracy movement in China. I don’t have the opportunity to ask Dr. Paul in person. But from what I learnt of his non-intervention policy, it only means he acknowledges this problem is between Chinese government and Chinese people. America needs to secure its economic status and liberty before preaching to others!

Last, Dr. Paul’s stand on FOREIGN POLICY IS RIGHT! Actually most countries in the world are taking this stance. I will speak of some truth that no Americans want to hear. I spent my first 20 years in China and I know there is sort of hatred feeling towards Americans at those time. This feeling is more like a mix of jealousy of American’s wealth and power, and the threats from being bullied again by the developed countries. Because Americans want to play No. 1 and police the world and interfere with other people’s lives, many people were expecting a punishment or justice to Americans.

All trade relationships would be done between American companies and individuals, and foreign countries. The only thing Gov would do would be to tax imports and exports. This is all that the Government IS AUTHORIZED to do, Constitutionally, in times of peace.

What would be the result? If Gov wanted more money, they would tax exports and imports more. If the taxes were too high, nobody could afford to do export/import. Gov would lose money because nobody was doing international trade because of the high tax rate. So, Gov would lower the tax rate so that trade would start again, and they would get some money.

What would happen because of this? Jobs would come back to America. Americans would get paid what they were worth. The Wal-mart import/export near-monopoly would end. WE THE PEOPLE would manufacture quality for ourselves, and maybe for the rest of the world. Best of all, America would become the most powerful nation in the world!