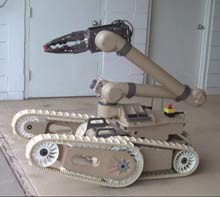 With the launch of the Warrior, a large wheeled robot with a hefty mechanical arm, military robots just got significantly larger and more adaptable. The robot rides on caterpillar tracks like a tank. It can climb stairs and cover rough terrain, and perform tasks ranging from the delicate (opening car doors) to the destructive (smashing car windows) with its two-meter-long mechanical arm.

Warrior is the latest invention from iRobot, the Bedford, Massachusetts, company best known for the Roomba robotic vacuum, and its line of remote-control PackBots, used by U.S. combat forces to disable improvised explosive devices and perform other dangerous tasks. The robot could be weaponized—in one test it launched a rocket that trailed explosives behind it to clear mines or other obstacles (see video).

Warrior, at just over 450 pounds, including its arm, is more than five times as heavy and much larger and stronger than a PackBot. That means Warrior can be much more of a generalist, says Tim Trainer, iRobot's vice president of operations for government and industrial robots. "With the small robots, you really have to optimize them for specific missions. With Warrior, you can provide more flexibility."

Packbot is designed to be carried like a backpack. Warrior is far too big, being just under a meter long, and standing a little over half a meter tall with its arm folded down. The robot's electric motor gives it a top speed of eight miles per hour (12.9 kilometers per hour) and enough power to pull a large car. The robot's tracks and "flippers" allow it to climb over obstacles half a meter in height, and to rear up and reach its arm up to 3.5 meters from the ground. The arm can lift more than 150 pounds (68 kilograms).

Artificial Intelligence: A Secular Look At The Digital Antichrist

Move over, autopilot: This AI can avoid other planes

No code, no problem--we try to beat an AI at its own game with new tools

Robot dog with machine gun hints of a dystopian future