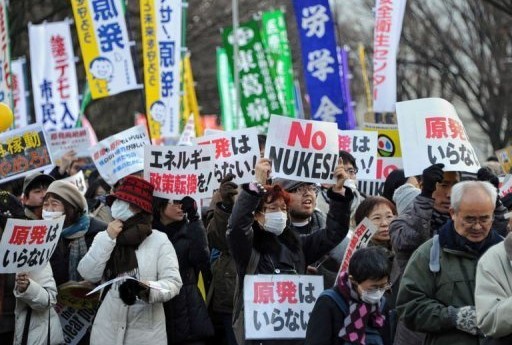 Thousands demonstrated in Tokyo on Saturday against nuclear power generation, 11 months after a massive earthquake and tsunami sparked reactor meltdowns at the Fukushima nuclear power plant.

Kenzaburo Oe, the 1994 Nobel prize winner for literature, told a central rally at Yoyogi Park, “Radioactive waste from nuclear power plants will be borne by generations to come.”

“This must not be condoned by human beings. It is against ethics,” the 77-year-old novelist said.

The rally was attended by 12,000 people, according to its organisers. Police estimated the turnout at around 7,000.

The March 11 quake-tsunami disaster left more than 19,000 dead or missing and sparked the Fukushima crisis, the world’s worst nuclear accident since the 1986 Chernobyl disaster, on Japan’s northeast coast.

Tens of thousands of people were forced from their homes around the plant, located some 220 kilometres (140 miles) northeast of Tokyo, as radiation levels rocketed, with many not knowing when and if they will be allowed to return.