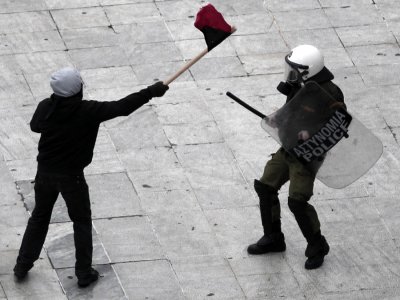 
The historic vote paves the way for Greece's European partners and the International Monetary Fund to release $170 billion (euro130 billion) in new rescue loans, without which Greece would default on its mountain of debt next month and likely leave the eurozone - a scenario that would further roil global markets.

Lawmakers voted 199-74 in favor of the cutbacks, despite strong dissent among the two main coalition members. A total 37 lawmakers from the majority Socialists and conservative New Democracy party either voted against the party line, abstained or voted present.

Sunday's clashes erupted after more than 100,000 protesters marched to the parliament to rally against the drastic cuts, which will ax one in five civil service jobs and slash the minimum wage by more than a fifth.

Americans Who Can't Afford Homes Are Moving to Europe Instead

Something That We Have Been Waiting For Just Happened, And It Is A Really Bad Sign…

EU Economies are Down on Their Knees

"Parity Is Just A Matter Of Time Now":