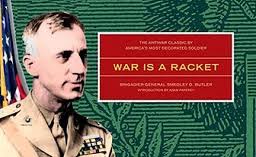 The day I read this speech on my brothers blog my entire world view changed. I was almost sick.

I was an "I like RP except for foreign policy" guy at the time ('09 or '10). I had been aware of the arguments for Ron's foreign policy, as my brother was a supporter, but I still found a way to justify the wars and rationalize my decision to join the Army in 2008.

Reading this though brought to light what my brother was telling me. The fact that this prestigious General said this in 1933 is what really got to me.

Being a somewhat recent convert from a 'patriotic' neocon to a real patriot, I would like to suggest passing this on anyone you know who has the same mindset now that I had then. I hear lots of arguments to support Ron's foreign policy and I can see why they don't work, because for the longest time they didn't work on me.

Perhaps we could give this speech publicity at the up coming Veterans For RP Rally or make pamphlets or something to hand out. Being that it was what put me 'over the edge,' I think it would be prudent to use it to support a "Foreign Policy of Peace".

WAR is a racket. It always has been.

A racket is best described, I believe, as something that is not what it seems to the majority of the people. Only a small "inside" group knows what it is about. It is conducted for the benefit of the very few, at the expense of the very many. Out of war a few people make huge fortunes.

In the World War [I] a mere handful garnered the profits of the conflict. At least 21,000 new millionaires and billionaires were made in the United States during the World War. That many admitted their huge blood gains in their income tax returns. How many other war millionaires falsified their tax returns no one knows.