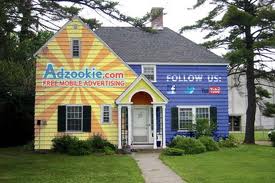 (Reuters) - When they saw the house on El Dorado Drive in this Los Angeles suburb being painted a startling orange and green and giant billboards hung on the outside, Scott and Beth Hostetler's neighbors were initially angry and confused. Some even considered calling the police.

But what they witnessed on Friday was not an offensive redecoration decision by the Hostetlers, but rather the debut of one of the more unusual schemes to arise from the housing crisis. In return for allowing the front of their four-bedroom house to become a garish advertisement, the Hostetlers are getting their nearly $2,000 monthly mortgage paid by the marketing company behind the project, Brainiacs From Mars.

In a residential neighborhood without heavy traffic, cars passing by the house slowed and drivers gawked at the vivid colors and a giant Brainiacs From Mars billboard.

Romeo Mendoza, the company's founder and CEO, told Reuters that his ultimate goal is to turn 1,000 homes across the United States into giant advertisements for his marketing firm.

And in each case struggling homeowners will get their mortgage paid, for up to a year.