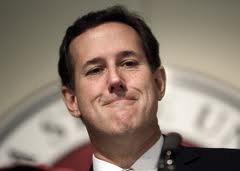 In interviews on the Sunday news shows, Mr. Santorum, a former Pennsylvania senator, dismissed his poor showing in Saturday’s Maine caucuses and the straw poll held at the influential Conservative Political Action Conference.

“We think this is a two-person race right now,” Mr. Santorum said on CNN’s “State of the Union.”  “We are just focused on making sure folks know we are the best alternative to Barack Obama and we have the best chance of beating him.”

Mr. Santorum said Mr. Romney’s attacks on his conservative credentials were a sign of desperation.  “You reach a point where desperate people do desperate things,” he said on ABC’s “This Week.”

In Maine, where turnout was slim, Mr. Santorum came in third, with 18% of the vote, behind Mr. Romney and Rep. Ron Paul, but he noted on ABC that the result was strong considering he did not campaign in the state. Newt Gingrich, whose campaign has hit a rough patch since his victory in the South Carolina primary last month, came in fourth.

Appearing on CNN, Mr. Santorum said straw polls, like the CPAC vote, are won by candidates who pay for people to come in and vote. Mr. Santorum came in second in that poll of conservative activists.

Not wise for Santorum to come out with the truth. All what he said here is true. But when he excludes Ron Paul at this point in time, he will lose those votes "from the lunatic fringe" that the Newhamshire newspaper described.  He needs those votes to beat Romney.

I expect Santorum to play a smart game plan. He should not antagonize but instead continue to massage the hope of Ron Paul supporters that Ron Paul is going to be the next president of the United States, how delusional that might be.

Just a little more time is what Santorum needs -- wait for Ron Paul's gradually disappearing stay in the race to whither in the vine while enterprising supporters are still making a business out of his candidacy. As everybody sees Ron Paul is fading away [had not won any single primary], and the decision to quit is now about to be announced. Santorum should have waited, and grab those orphaned votes "from the lunatic fringe" the moment Ron Paul drops out.

That is not the 1st stupid thing Santorum has said. Here is a rela zinger! You can tell this clown is really out there!

Santorum ignorantly rails on freedom & individualism.
“One of the criticisms I make is to what I refer to as more of a Libertarianish right.   They have this idea that people should be left alone, be able to do whatever they want to do, government should keep our taxes down and keep our regulations low, that we shouldn’t get involved in the bedroom, we shouldn’t get involved in cultural issues.   That is not how traditional conservatives view the world. There is no such society that I’m aware of, where we’ve had radical individualism and that it succeeds as a culture.”    Hear Rick's own words from the video in the following  link. This idiotic comment alone should get Santorum bounced. Rick is diametrically opposed to Ron Paul's freedom & liberty message, the Constitution & seems to know very little about US history.

Even Santorum's nephew sees through the CINO.

Santorum is for big govt.