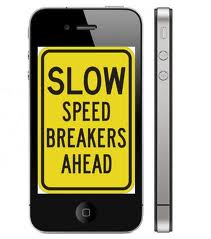 NEW YORK (AP) - Mike Trang likes to use his iPhone 4 as a GPS device, helping him get around in his job. Now and then, his younger cousins get ahold of it, and play some YouTube videos and games.

But in the past few weeks, there has been none of that, because AT&T Inc. (T) put a virtual wheel clamp on his phone. Web pages wouldn't load and maps wouldn't render. Forget about YouTube videos - Trang's data speeds were reduced to dial-up levels.

The reason: AT&T considers Trang to be among the top 5 percent of the heaviest cellular data users in his area. Under a new policy, AT&T has started cutting their data speeds as part of an attempt to manage data usage on its network.

So last month, AT&T "throttled" Trang's iPhone, slowing downloads by roughly 99 percent. That means a Web page that would normally take a second to load instead took almost two minutes.

AT&T has some 17 million customers with "unlimited data" plans that can be subject to throttling, representing just under half of its smartphone users. It stopped signing up new customers for those plans in 2010, and warned last year that it would start slowing speeds for people who consume the most data.

What's surprising people like Trang is how little data use it takes to reach that level - sometimes less that AT&T gives people on its "limited" plans.

Trang's iPhone was throttled just two weeks into his billing cycle, after he'd consumed 2.3 gigabytes of data. He pays $30 per month for "unlimited" data. Meanwhile, Dallas-based AT&T now sells a limited, or "tiered," plan that provides 3 gigabytes of data for the same price.

This has been happening all over the place. My guess is that there is a plan afoot to reduce or stop individual communication. It is probably Government backed. If the companies wanted to really reduce users' bandwidth, and make money at the same time, they could easily offer an add-on package to increase bandwidth for more money. They are doing this right now with many plans. After all, it is about money, isn't it? Or is it about control !?