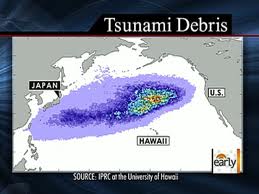 The monster earthquake and ensuing tsunami that ravaged Japan in March 2011 left behind a ton of floating debris in its wake—25 million tons to be exact.

And now that giant mass of garbage, carrying everything from small fishing vessels to cars to TV sets, is headed toward California's beaches, scheduled to reach the U.S. West Coast as early as 2014, according to researchers at the University of Hawaii at Manoa.

The Daily Mail dug up a computer animation created last April by Nikolai Maximenko and Jan Hafner from the university's International Pacific Research Center that predicts the likely pathways of the tsunami debris.

The model projections show the trajectory of the floating wreckage from March 11, 2011, to 2019.

According to the report the debris should take this path:

The debris first spreads out eastward from the Japan Coast in the North Pacific Subtropical Gyre. In a year, the Northwestern Hawaiian Islands Marine National Monument will see pieces washing up on its shores; in two years, the remaining Hawaiian islands will see some effects; in three years, the plume will reach the US West Coast, dumping debris on Californian beaches and the beaches of British Columbia, Alaska, and Baja California. The debris will then drift into the famous North Pacific Garbage Patch, where it will wander around and break into smaller and smaller pieces. In five years, Hawaii shores can expect to see another barrage of debris that is stronger and longer-lasting than the first one. Much of the debris leaving the North Pacific Garbage Patch ends up on Hawaii’s reefs and beaches.

Watch the time-lapse below: