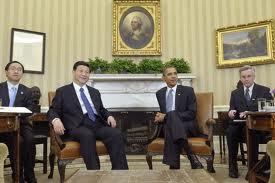 President Obama greeted the Chinese heir apparent in the Oval Office on Tuesday morning, a venue where the U.S. president usually receives only the nation's closest friends.

But even as the two countries eye one another warily, the Obama administration wants to keep its options open with Vice President Xi Jinping as he prepares to take his place as president next year.

In a joint appearance before their meeting, Obama told reporters that the U.S. relationship with China is based on "mutual interest and mutual respect," and that such a relationship is in the interests of the rest of the world, too.

The United States welcomes China's "peaceful rise," Obama said, which he said has the power to "help to bring stability and prosperity to the world."

Xi said that he and Vice President Joe Biden had reached a "new consensus" during their talks, though he didn't say what that was, and that his goal is to "move forward the U.S.-China relationship."

Xi, 58, is expected to succeed Chinese President Hu Jintao as leader of the Communist Party later this year and as president next year, a position he will probably hold for a decade.