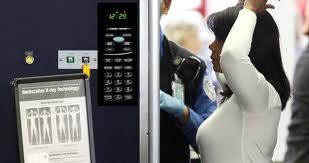 Female passengers say they are being targeted by TSA screeners for sexual harassment, with one Texas woman being forced to pass through a naked body scanner three times so chuckling male TSA workers in a back room could get a good look at her “cute” figure.

The incident occurred at DFW International Airport earlier this month. Wife and mother Ellen Terrell was asked by a female TSA screener “Do you play tennis?” When Terrell asked why, the screener responded, “You just have such a cute figure.”

Terrell was then told to go through the naked body scanner not once but a second time. She then heard the TSA screener talking into her microphone saying, “Come on guys, alright, alright, one more time.”

After Terrell was forced to undergo a third blast of radiation from the body scanner, the male TSA agents in the back room who were obviously enjoying the show tried to send her through yet again to see more images of her naked body.

“Guys, it is not blurry, I’m letting her go. Come on out,” the female TSA screener said, finally ending the ordeal.

“I feel like I was totally exposed,” Terrell told CBS 11. “They wanted a nice good look.”