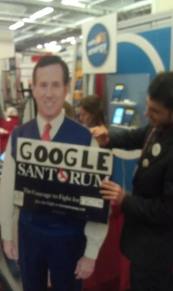 I'm not going to personally attack Rick Santorum or his wife who opted to sue her chiropractor for $500,000 because she "gained weight".
Senator Santorum was stumping for a $250,000 cap on medical malpractice suits. She settled for $350,000 reportedly.
Whatever.
It's no secret Santorum is a serial hypocrite.

But Santorum's voting record is overwhelmingly inconsistent with the campaign propaganda that comes out of his mouth.
He is not remotely a conservative or a defender of freedom. He is a big government, "Show-me-the-money" LOBBYIST. Period. End of story.