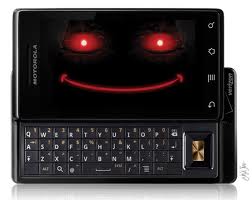 Like the crack epidemic of the 1980s, RIM’s BlackBerry handsets created a generation of telephone typists addicted to phone-based correspondence. We quickly came to expect — nay, demand — instant responses to our e-mails, aided by the raised BlackBerry keyboards that soon became indispensable.

And, hey, I’ll cop to it: I too became hooked on CrackBerry.

Though we’ve since progressed to a new age, one of touchscreen-powered iPhones and Androids, our thumbs’ muscle memory still longs for keyboards. That’s where Motorola’s Droid models come in. When the first Droid was released in 2008, it was the perfect crossover phone for inductees leaving BlackBerries for a new platform. And with both physical keyboards and touch-based controls, Droids have been the go-to Android phones for remaining keyboard holdouts.

The Droid 4 — which just landed on our doorstep this morning — carries on the Droid brand tradition by focusing on the keyboard as the phone’s most polished feature.

The chassis is solid to the touch, with hard, steely lines and a gunmetal-colored plastic finish that’s in step with all previous Droid generations. Sheathed beneath the slide-out screen is the raised, five-row keyboard, edge-lit for night use and topped with a brushed finish, almost matte-like in feel. It’s easily Motorola’s finest keyboard construction effort.