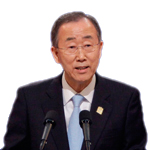 United Nations boss Ban Ki-moon and his top deputies gathered in secret last year to chart the future course of humanity through "sustainable development," a controversial concept the UN equates with "saving the planet" in what would ultimately entail a radical and complete transformation of human civilization. But even though the erection of a global so-called "green-economy" regime is a top UN Tweet. – New American

Dominant Social Theme: UN is focused on making things better for the environment.

3 Comments in Response to Does the UN Plan Full-Spectrum Domination?

I hear you both.  Kim Dyer

"They might even use electronic mind control machines to "help" people to see how good the plan is." - What does the public really know about those new 'Smart Meters'? Well, it could be true that those new machines on the side of your house will have nothing to do with mind control, but getting thousands of signals passing through your home/body/brain does. Since those machines were put on the homes in my city, I have not been sleeping a normal night. Some other neighbors feel no ill affects, but adding up just a few people per block and you have a potential for thousands of people becoming nut cases from lack of sleep. All it would take is for one new signal to be sent out among the public and those ill sleepless people could become unglued and from there, whos knows what could happen.

Here is what will happen along these lines. The UN (or some organization similar to them) will advertise what will appear to be an extremely excellent plan that would do away with ALL the different kinds of trouble around the world. They might even use electronic mind control machines to "help" people to see how good the plan is.

People will accept the plan, along with formal UN leadership. For awhile there will be prosperity worldwide. Then the truly GREAT RAPE of the people and the planet will begin. People will wish for the days of Hitler and Stalin. Maybe I'll be lucky enough to be in the grave before this happens. But my poor kids...