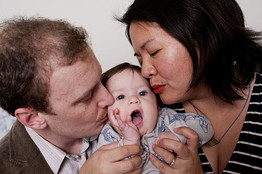 Marriage across racial and ethnic lines has reached a new high in the U.S. amid fading social taboos in an ever more diverse society.

About 15% of new marriages in the U.S. in 2010 were between individuals of a different race or ethnicity, more than double the share in 1980, according to a report released Thursday by the Pew Research Center. Among those married in 2010, 9% of whites, 17% of blacks, 26% of Hispanics and 28% of Asians married outside their ethnic or racial group.

"Intermarriage in this country has evolved from being illegal to being a taboo to being merely unusual," said Paul Taylor, the Pew official who edited "The Rise of Intermarriage" report. "With each passing year, it becomes less unusual."

Shifts in behavior, attitudes and demographics—including immigration—have contributed to the intermarriage trend, which the report analyzes based on historical data and Census Bureau figures from the annual American Community Survey from 2008 to 2010.
In particular, attitudes have changed markedly since the Supreme Court declared antimiscegenation laws unconstitutional in 1967. Until then, whites were still banned from marrying nonwhites in 16 states

5 Comments in Response to Interracial Marriages in U.S. Reach a Record

These comments Wowwww me with my mouth open gasping for breath. I am disheartened. I realized  how this space is going to waste. How I wish we can make it useful instead of turning it into something so disgraceful!

There will be comments, all right............. but not without a word or two that the Government is a whore. Only sick minds are viewing this page, in case you have forgotten.

The same attacks against the Government over and over again. This very emotionally damaged mind can no longer discuss issues, like what interracial marriages do to our evolving society when it reaches a record high, and the like. Using a name and other different aliases could not hide the writer’s

They tell us in government schools we are all the same and there is no diffrences. Then why do the record what race we are?

As usual. It's the hypocritical Government that is racist more than anyone. After all, Government is the one that makes laws against racism. Yet, they, themselves, are still recording things as though there are different races. And worse, they are reporting it.