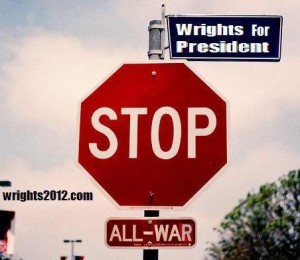 “Having seen the people of all other nations bowed down to the earth under the wars and prodigalities of their rulers, I have cherished their opposites, peace, economy, and riddance of public debt, believing that these were the high road to public as well as private prosperity and happiness.”- Thomas Jefferson

BURNET, Texas (Feb. 11) – My most natural reaction to the simply put question, “Why peace?” is puzzlement. My natural response to the question would be, “Why peace? Why not?” How could peace possibly be a bad thing? Then I realize how aloft and self-righteous simple questions and answers can sometimes seem. It is best, as is my normal fashion, to treat even seemingly simple questions as serious inquiries into fundamental freedom throughout the United States and the world. I understand we must be able to demonstrate why peace is beneficial to individuals, nations and civilizations. So, let’s start over… Why peace?

I think the clearest and simplest answer is, “Why not; we have tried war, over and over again, we never win, and the problems we war against only get worse. As the old ’60s song goes: all we are saying is, give peace a chance.” Not only that, but history proves that when there is no war, people prosper. There have been economic booms, scientific advancements, and cultural progress after every conflict American has fought, beginning with our War of Independence.

War breeds war. That is all it can do. War does nothing but devour valuable resources and destroy precious lives for the sole purpose of perpetuating itself. As Randolph Bourne wrote, “War is the health of the State.” War is a mechanism used by the ruling elites of the State to coerce and control the people, so it becomes essential that whenever one war is complete, another is instigated elsewhere so that the mechanism keeps running.

On the other hand, peace breeds prosperity. If War is indeed the “health of the State,” then Peace can be nothing less than the “health of the People.” Being at peace means valuable natural resources can be preserved and used at home where we need them most. Being at peace means young fathers and mothers can live and enjoy free trade, not only among themselves but with the world, instead of dying capriciously and unnecessarily, for political gain or to line the pockets of those who profit from their sacrifice.
History teaches us that the key elements to prosperity are freedom and peace. You don’t go to war with people you like, or with people you know, or with people with whom you are trading and doing business. Even after our fledgling republic was nearly torn asunder in civil war which literally pitted brother against brother and nearly destroyed the South, our reunited nation and all its people advanced and prospered after peace was restored.

After both the world wars of the 20th Century, there was prosperity and advances in science, technology and culture that only ended when the nation again blundered or was bamboozled into war. The post-War War I economic boom saw the increased use of machines and factories for mass production, which made goods faster and cheaper to produce, thus lowering prices so the average American could buy and enjoy them. The Roaring Twenties roared with more than the music and dancing in the burgeoning commercial radio and movie industry. American homes roared with the sound of newfangled, labor-saving devices like electric vacuum cleaners, toasters, washing machines and refrigerators. Americas not only had more freedom to enjoy the fruits of their labor, they were also literally set free to travel when the automobile became affordable and part of every American household.

Despite common belief, World War II did not end the Great Depression, but instead delayed recovery. “Tanks, bombs, and helicopters have limited uses outside of military applications,” writes Art Carden, assistant professor of economics and business at Rhodes College in Memphis, Tenn. and an adjunct fellow with the Oakland, California-based Independent Institute. “The labor that was used to produce them was not available to produce consumer goods and services; in fact, people went without consumer goods.” The boom began after the war, when the troops came home. Again, there was a great surge of economic expansion, technological invention and innovation and cultural change, including the birth of the Baby Boomer Generation, of which I am a late entry. Even the nations devastated by the war, France, Germany and Japan, prospered. In the decade after World War II, colonialism ended and dozens of new, free nations were born. Many of the new countries of this Third World rejected taking sides in the looming Cold War between the United States and the U.S.S.R that was dividing the world once again into warring factions, and sought to achieve freedom and prosperity peacefully, following a third way.

The other wars that American politicians are so fond of creating over social and political issues stifle prosperity too and hurt the very people they are designed to help. We have been fighting the war against poverty since the Johnson Administration and all we have done is spun a web of social programs that somehow have locked poor people into poverty. We’ve been fighting the war on ignorance since the ’70s and our children, who were once the envy of other nations, can no longer read. The War on Drugs, the most devastating and destructive war in American history, has been raging for more than 40 years. In addition to thousands killed each year, it has wasted billions of dollars, and has put more people in jail than any other nation in the world. It has made it profitable for pushers to infiltrate our schools to an extent that the legal vices, tobacco and alcohol, have never been able to do.

The cost of America’s current major wars in Iraq and Afghanistan has surpassed one trillion dollars. While this figure is staggering, the real cost of these conflicts to our economy and our liberty is even more staggering. One trillion dollars is an almost incomprehensible number, but what is even more incomprehensible is the fact that most of that is borrowed money; the federal government borrows about 43 cents of every dollar it spends, and then uses it to build schools, roads and hospitals in countries where we’re partly responsible for destroying their infrastructure. Borrowing money and going further into debt to destroy, rebuild, and maybe destroy again, is not only insane, it’s immoral.

The military budget is more than $700 billion, and climbing each year. In real terms, defense spending is more today than at any time during the Cold War, the Korean War, or the Vietnam War. Our founder’s would be appalled. They predicted that war would be the most dreaded threat to our liberties. They told us that from war would precede debt, taxes, fraud and degeneracy of morals. They warned us that no nation could preserve its freedom in the midst of continual warfare. As James Madison said:

“Of all enemies to public liberty, war is, perhaps, the most to be dreaded, because it comprises and develops the germ of every other. War is the parent of armies; from these proceed debts and taxes; and armies, and debts, and taxes are the known instruments for bringing the many under the domination of the few.”

With the Internet, the world today is literally our marketplace. War shuts down part of that marketplace, but peace allows that marketplace to thrive. The War on Terror declared after the tragic events on September 11, 2001 has led to one war right after another. This caravan of conflict has plunged us deeper into debt as we sacrifice our precious natural resources, not the least of which are our brave men and women. In fact, those who volunteer to defend and protect the Constitution are those we should be most concerned about. They should be working in America, not dying in Afghanistan or Iraq or Libya, or wherever the warmongers who control our government care to send them!

Americans need to Occupy Congress and tell them to stop killing people all over the world, stop making new enemies every chance they get, and get out of the way of creative and productive entrepreneurs so that Americans can once again start producing the best goods and services on the planet! Bring our job force home, America! Open the world to trade by declaring peace! Maybe — just maybe — once again the “Made in America” tags you see will begin to rival the number of tags that read “Made in China.”

Instead of teaching our young people to kill, we should be teaching them about commerce and trade. In a word: business. But because war has become America’s business, some would even say its chief industry, all other business suffers. Now any good accountant will tell you, in order to have a successful business you must be able to show a profit, and the bottom line is — war doesn’t pay. That is what makes it such a lousy business for our nation to get into. With the one exception of defending the country from foreign attack, war only takes, giving nothing in return, save economic ruin and human heartaches. The natural resources and manpower eaten up by an imperialistic war machine are lost forever to starving job markets and industry at home.

The young people who have volunteered to serve in our military, for what they were told and believed was a noble cause, have sacrificed more than enough. It’s time for America to end the deceit engineered to gain their loyalty and trust and to stop dishonoring their sacrifice by wasting their lives in futile and endless conflict. Bring them home where they can work for themselves and their families, prospering in a peaceful country. The biggest favor we could do for most of our troops would be to retire them so they can come home and go to work. We need prosperous patriots more than we need hallowed heroes. We can make this country great again, but it will require peace. Peace breeds plentiful production, while war can only breed devastating destruction.

As my friend Anthony Gregory has written, “Libertarianism is the ultimate antiwar philosophy.” Libertarians view aggressive war as the greatest of government evils, as purely destructive and grossly immoral, not just because of the killing, but because of “the expansion of state power; the regimentation of the economy; the crackdowns on civil liberties; the financing of it all through taxation and inflation…”

Government is force and war is the inevitable, ultimate and deadliest expression of that base characteristic. Force and coercion are not only incompatible with freedom and liberty, they are destructive of them. Freedom and liberty can only survive and flourish in a society where peaceful exchange of goods, services and ideas is preserved and protected by the respect of everyone involved, by mutual consent. Just as freedom and responsibility are said to be two sides of the same coin, so are peace and prosperity.