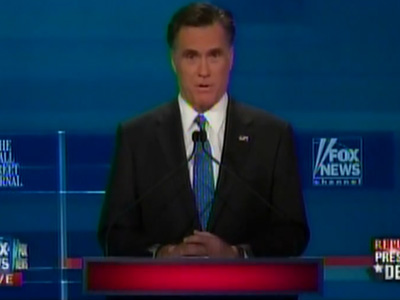 Next week, the four remaining Republican candidates will debate for CNN on Wednesday. It will be the 21st televised debate, likely be the last.

Ashley Parker of the New York Times is reporting that Romney has bowed out of a potential debate on March 1st in Atlanta, Georgia - Newt Gingrich's home state. Subsequently the debate has been cancelled. The Times relays the Romney campaign's official position:

“Governor Romney will be spending a lot of time campaigning in Georgia and Ohio ahead of Super Tuesday,” wrote Andrea Saul, a campaign spokeswoman. “With eight other states voting on March 6, we will be campaigning in other parts of the country and unable to schedule the CNN Georgia debate. We have participated in 20 debates, including eight from CNN.”

What's clear is how little upside for Romney in further debates with his Republican foes. Gingrich thrives in debates, and as their number and frequency has diminished, so has his standing in the polls. The Romney campaign can plausibly say that they've done enough of these, and that they'd rather be holding rallies in the states that are coming up for a vote.