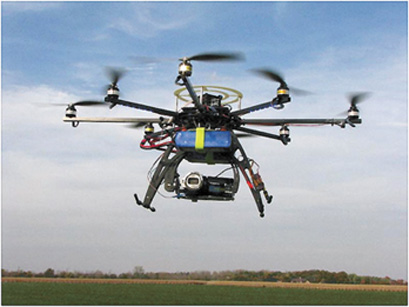 Steve Hindi, president of SHARK (SHowing Animals Respect and Kindness), said his group was preparing to launch its Mikrokopter drone to video what he called a live pigeon shoot on Sunday when law enforcement officers and an attorney claiming to represent the privately-owned plantation near Ehrhardt tried to stop the aircraft from flying.
"It didn't work; what SHARK was doing was perfectly legal," Hindi said in a news release. "Once they knew nothing was going to stop us, the shooting stopped and the cars lined up to leave."
He said the animal rights group decided to send the drone up anyway.
"Seconds after it hit the air, numerous shots rang out," Hindi said in the release. "As an act of revenge for us shutting down the pigeon slaughter, they had shot down our copter."
He claimed the shooters were "in tree cover" and "fled the scene on small motorized vehicles."
"It is important to note how dangerous this was, as they were shooting toward and into a well-travelled highway," Hindi stated in the release. He said someone from SHARK called the Colleton County Sheriff's Department, which took a report of the incident.
The Colleton County Sheriff's Department filed a malicious damage to property incident report.
According to the report, Hindi told the responding deputy the group's remote-controlled aircraft "was hovering over U.S. 601 when he heard a shot come from the wood line. The shot sounded to him that it was of small caliber."
The incident report went on to state that "once shot, the helicopter lost lift and crash landed on the roadway of U.S. 601."
The deputy noted in the report that he was unable to speak to anyone at Broxton Bridge Plantation following the incident.
Hindi estimated damage to the drone at around $200 to $300.
Hindi said he will seek charges against those who shot down the drone.
"This was SHARK's first encounter with the Broxton Bridge Plantation, but it will certainly not be the last," Hindi said in the release. "We are already making plans for a considerably upscaled action in 2013."