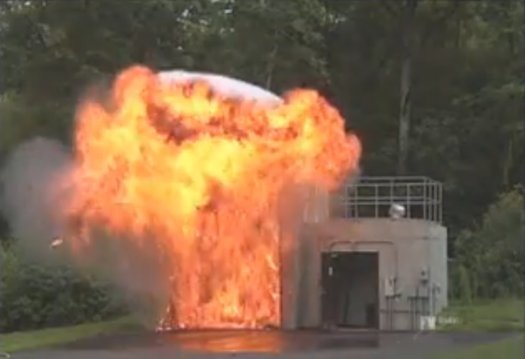 Along with annoyingly adhering to your TV screen and tabletops, dust can be a deadly material, exploding with enormously destructive force in places like coal mines, sugar refineries and grain silos. The explosive properties of normal dust are pretty well known, but what about non-traditional dust? Not all dusts are created equal — and dust derived from the materials of the future could present a very different type of danger.

Led by S. Morgan Worsfold of Dalhousie University in Halifax, a team of researchers from Canada and Norway set out to determine these properties. They surveyed the fairly small body of published research on blowing up nanoparticles, flocculent materials — fluffy synthetic stuff — and hybrid dust mixtures, which they define as any dust with an added liquid or gas.
Dust is defined as a teeny solid less than 420 microns in diameter, but that does not cover the nanoscale world. Nanodust, and its potential explosive properties, is relatively under-studied. A general rule of thumb in the world of dust research holds that the smaller the particle size and the greater its surface area, the more explosive it is. Nanoparticles are tiny, but have a large relative surface area because of the way atoms are arranged in them.

The Cold War Racket Never Ended for the U.S.