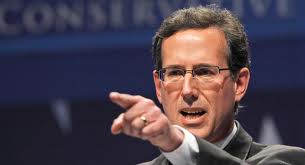 Here’s the state of our national politics: The frontrunner for the Republican presidential nomination says that that President Barack Obama embraces a “phony theology”; that large-scale public education is an outdated idea, and that contraception is “not okay.” And let’s not forget his statement last month that he didn’t want to “make black people’s lives better by giving them somebody else’s money.”*

Yes, you heard all that right. If current polls hold up, Rick Santorum, the former U.S. senator from Pennsylvania could be the presidential nominee of one of the nation’s two major parties. The most recent Gallup national tracking poll shows Santorum with a 6-point lead over former Massachusetts governor Mitt Romney.

At a campaign stop in Ohio yesterday, Santorum, an old-school, anti-contraception Catholic, asserted that Obama’s agenda sprang from a false theology. As quoted by the New York Times, Santorum said of Obama’s overall agenda: