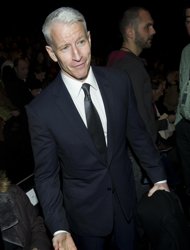 To celebrate the 100th episode of Anderson Cooper's daytime talk show in an hour that airs Monday, a giant cup of frozen hot chocolate topped with whipped cream was wheeled onto the set after its star interviewed a svelte Janet Jackson.

Something sweet was undoubtedly welcomed. It's been a tough stretch for "Anderson," illustrating how difficult it can be to launch a successful television series from scratch.

In six months, the show has weathered a scandal involving a scheduled guest's serious injury, seen three top executives leave and a new one join midstream, and experimented with different formats to see what suits Cooper best.