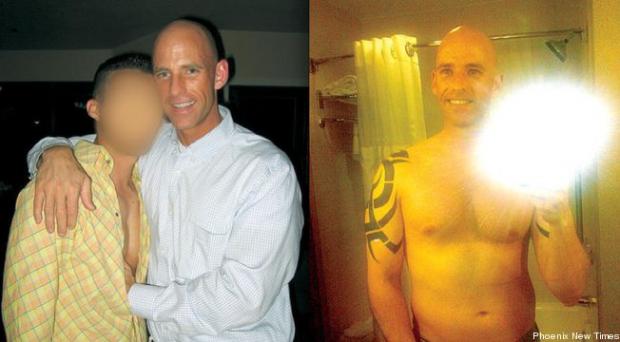 Pinal County Sheriff Paul Babeu today emphatically denied allegations that he or his attorney threatened to deport a jilted ex-lover after their relationship soured, as a Phoenix newspaper reported on Friday, and said he plans to remain sheriff and continue his campaign for higher office.

Babeu, a Republican who is running for Congress in the 4th Congressional District, just as emphatically defended his right to take sexually explicit photographs of himself and send them to boyfriends.

“We’re talking about personal liberties and freedoms,” he told dozens of reporters Saturday afternoon at a press conference.

Though he said he had not posted or sent explicit photos of himself “for some extreme time,” Babeu did not say he wouldn’t do so again in the future.

Flanked by dozens of supporters, including many of his top sheriff’s commanders who were wearing their uniforms, Babeu addressed claims made Friday by the Phoenix New Times. The alternative weekly newspaper published a story on its website early Friday evening in which his ex-boyfriend and the ex-boyfriend’s attorney said the sheriff and one of his closest aides threatened to deport the man if he spoke publicly of his years-long romantic relationship with Babeu.

“At no time did I or anyone who represents me threaten deportation. Ever,” Babeu said of the allegation. “It’s blatantly and completely false.”

Well if he's not going to be my county's sheriff any more here in Pinal Co. AZ i'm sure he'll get a homeland security job with big Janet Napolitano.

"... including many of his top sheriff’s commanders who were wearing their uniforms." ???

Sheriff Babeu may have "rights" and "freedoms", but I doubt if Republican voters will appreciate his judgment when electing a congressman. The whole issue of "sexting" destroyed Congressman Weiner's career in politics. Sheriff Babeu has not only been licentious and daring in his wireless communications upon the public and interceptable airwaves, he was duplicitous in his relationship with his homosexual illegal immigrant lover and his constituents. Sheriff Babeu should not waste anybody's time seeking election to Congress or any other office.

Arizona Audit: 74,243 Mail-In Ballots Returned with 'No Clear Record of Them Being Sent'