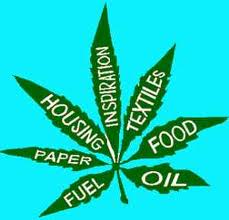 Republican presidential candidate Ron Paul drew cheers from supporters in North Dakota Monday while making a pitch for free market economics to be applied to farmers, allowing them to grow alternative crops such as hemp.

“There is no reason, in a free society, that farmers shouldn’t be allowed to raise hemp. Hemp is a good product,” said Mr. Paul Monday, The Associated Press reports.

It is illegal to grow hemp in the U.S. because of its relation to marijuana, however some states, including North Dakota, have urged the Drug Enforcement Association to allow the cultivation of hemp. The DEA considers hemp to be a controlled substance.

4 Comments in Response to Ron Paul: ‘Hemp is a good product’

Oh, boy …! Bayag’s comment that I am reading now is terrific. I am glad that in my introductory announcement, I did not choose to join the group of, what I read now, the "lunatic fringe". The distinct group of Bayag and Co., is obviously composed of "intellectuals". It is understandable because to defend American values and to protect the Government – the Government that we cannot live without – needs intellectuals. Attacks of loonies bent to destroy the United States, need a lot of information to give and explanation to make, especially when there is a serious threat to our national security. Only the learned – not those with a funky mind -- can do that task.

I have nothing personal against Ron Paul. You may have your own reason for liking him – that I will not take away from you -- but honestly, I don’t think he is the kind of politician we want.

You should know, Sammy, that to the educated segment of our society, Ron Paul pictures himself as a dead horse. It is no use for you to resuscitate a dead horse. He only lives in the mind of people like you. Their brain is nourished by the saliva that comes out when they badmouth. That’s why they are impulsive, reckless and mentally jaundiced they could hardly see. I will demonstrate to you why you are exactly this bad example:

You don’t know anything that’s why you asked this: How is Ron saying to break the law?

I call your attention to this article itself. This is what is written: "It is illegal to grow hemp in the U.S…" Do I need to explain to you that the law declares that growing hemp in the U.S. is ILLEGAL? Okay, I hope you still follow me at this point.

Ron Paul told farmers that to drink raw milk is their freedom to choose what to eat or drink. And he got his television coverage, like any publicity maniac always do.

To protect the public, the law [FDA] "prohibits" drinking unpasteurized raw milk or eat unpasteurized milk products because the bacteria it carries like Salmonella, E. Coli and Listeria could cause an epidemic and on record had already killed quite a number of people. Listening to Ron Paul, the farmers and Ron Paul followers from the "lunatic fringe" continued to drink and distribute raw milk. They violated the law. Just recently, the Court declared that they violated the law – again thanks to Ron Paul. These are only a couple of examples to make you see what you cannot see.

Because you don’t know anything, you also asked me: "Have you read Ron's books on economics?" As if you are proud in asking me this question. No, I have not, and I won’t read or listen to whatever he writes or whatever he says in Economics. Only those from the "lunatic fringe" would do that. Unlike you, I am not from there. I have too much of Economics in school where I spent a good portion of my life. And you want me to read a book in Economics that’s written by a publicity maniac whose bogus economic expertise came from delivering babies? You must be really, really crazy.

If you soap up your mouth and stop calling highly educated people like me paid "shills", maybe that life from the gutter that you seem to enjoy will change for the better. You don’t need to do it for yourself – you are done -- do it for your young kids or family who deserved a chance for a better future.

I sure hope you were being tongue in cheek.  Otherwise you just made yourself look like another Spooky Dude Homer Simpson paid shill.

Have you read Ron's books on economics?

How is Ron saying to break the law? He is saying that the law is bad, ignorant, stupid...Hemp & smoking cannabis  prohibition is based on lies, misinformation & fear. Do you know the reason smoking cannabis was linked to hemp in the 1st place to make it appear that hemp was a dangerous substance? Hemp can't get ya 'high'. so where's the danger in growing it?

How does saying it should be legal promote breaking the law? Do you think Reefer Madness was a documentary?

Ron Paul is not qualified to lecture on Economics. Only economaniacs listen to him. He preaches freedom to violate the law. To grow hemp is prohibited, so is marijuana, so is drinking raw milk and spread bacteria-caused epidemic. If you come across a video that is against the law, most likely Ron Paul is in it!