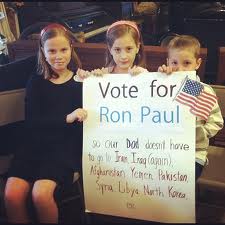 On December 16, 2007, on the two-hundred-and-thirty-fourth anniversary of the Boston Tea Party, Ron Paul, congressman and Presidential candidate, presided over a nationwide fund-raiser. This was a new tea party, with a new slogan: “Liberty is brewing.” In Boston, hundreds of Paul’s supporters marched to Faneuil Hall. Paul himself appeared in Freeport, Texas, where organizers had prepared barrels for him to dump into the Brazos River. One barrel read “United Nations”; another read “I.R.S.” The campaign raised more than six million dollars in one day, which was a record, and the event prefigured the protests that became common as the Tea Party movement coalesced, in 2009. The movement, with its focus on economic liberty and small government, sometimes seemed like a continuation of Paul’s campaign for the Republican nomination, during which he won a great deal of attention and a modest number of votes. It’s not much of a stretch to call him the “Godfather of the Tea Party,” as his campaign literature does, quoting Fox News. Ron Paul was ahead of his time

Most Popular This Issue