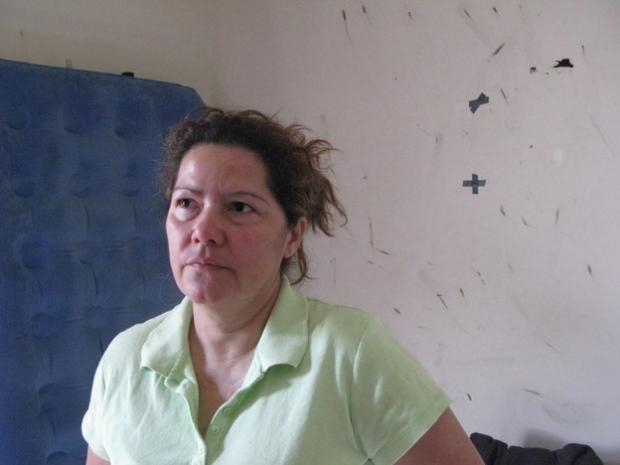 Across the country, big banks and other large investors are buying up tens of thousands of foreclosed rental properties. They're not always model landlords, according to tenants and regulators. Some banks are failing to follow local and state housing codes, leaving tenants to live in squalor — without even a number to call in the most dire situations.

Pedro Jimenez signed the lease for his second-floor apartment in 2006. Since then, he says, "Here was leaking water. Part of the ceiling [fell]. See all the windows crack." The panes are completely shattered; vandals broke them, he says.

East Oakland, Calif., is a rough city. It's known for abandoned buildings and a high crime rate. Still, it's home for Jimenez, a single dad with four kids.

His 7-year-old son, David, plays handyman. While his father patches the walls with plywood, David covers holes with sticky notes. There are yellow squares in every room but one: a bathroom that has been nailed shut.

"It's dirty and it's nasty," David warns. That's code for "dangerous." It has broken plumbing, splintered wood and exposed electrical wires. The original landlord was renovating when he lost the place in foreclosure, back in 2007.