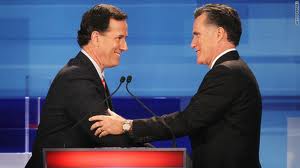 Newt Gingrich, the former Georgia congressman, arms folded and legs crossed under his chair, mostly stayed out of the crossfire.

Asked to describe himself in one word, Gingrich said “cheerful,” an emphasis he has made lately on the campaign trail. Yet Gingrich still had plenty of vitriol for President Barack Obama and the news media, represented a few feet away by CNN moderator John King.

At one point Gingrich even seemed to mouth the words “nice job” to Romney after an answer about contraception policy.

3 Comments in Response to Santorum, Romney do the most sparring

Has anyone in America noticed all the problems in America? All one need do is to look at the daily news to see the problems for the people: unemployment, foreclosures, medicine with side effects worse than the original problem, price of food, gas, and everything else, etc., etc..

So, if problems have come about with Government getting bigger and meddling more, why does anyone think that even bigger Government, and even more Government meddling will solve anything? Why do people think that Government is their salvation when it is Government that has made, and then increased, the problems in the first place?

The only reason Ron Paul is allowed into the debates is, he has a substantial following who are supporting him in his run for the Presidency, The rest of the guys are ALL bought and paid for by Big Business and Big Media, the same ones who support Big Government, which is attempting to make slaves of us all.

So the debates are really not debates. They are simply a discussion of the best ways to keep on destroying America.

Ron Paul was a wallflower in this debate. He was not taken by and has not taken any candidate in the discussions of hot issues the Republicans would engage Obama with in the coming presidential election. When the Congressman from Texas occasionally interfered, he was discordant if not irrelevant.

For example, when candidates were asked of their plan how to raise money to fund the deficit and balance the budget, the three candidates have brilliant plans, especially Gingrich’s natural energy development program that would rake billions of dollars in revenue, solve the unemployment problem and make U.S. no longer oil-dependent on the Middle East. Ron Paul’s? Cut, cut, cut down the budget, stop overspending, stop the war, stop violation of the Constitution [irrelevant] – in short, he seems unaware that what he was saying means contraction of the economy that could lead to further recession and depression. He always claims that he was the only "Constitutionalist" in the panel of candidates. How did a doctor of medicine become a "Constitutionalist" raised a lot of wrinkled eyebrows.

But anyway, what kind of economics does Ron Paul know? The answer is obvious. While listening to Ron Paul on this important subject, the other candidates were just looking at each other, and rolling their eyes.

If President, how to deal with Iran … to stop Iran from producing a nuclear bomb? The three candidates were unanimous in their position not to allow Iran to develop nuclear weapons or else in addition to more severe economic sanctions, more drastic actions short of war, should be taken against Iran. As if he was defending the President of Iran who wanted to wipe Israel off the map, Ron Paul strangely argued there was no evidence that Iran intend to arm itself with nuclear bombs! He was booed.

Ron Paul’s participation in this debate – as it was in previous GOP debates – was agonizingly tedious and boring. He was a participant from outside just standing there … this time just sitting there, looking inside. It was torture to watch. This latest lackluster performance could lead to his much-awaited announcement to drop out from the race. JV’s repor, re: GOP presidential debate in Mesa, Arizona, February 23, 2012.

Doug Stanhope would put it more funny than I:

but you can't get into arguments if they don't call on you.

Artificial Intelligence: A Secular Look At The Digital Antichrist

The Incongruities of Our Time Are Mind-Boggling